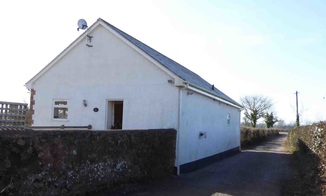 Jersey cottage, March 2015. It used to be a pair of cottages.
Arthur John Pillar was born on 5th January 1900, the younger of two sons of William Henry Pillar 1862-1940 of Sampford Peverell, a railway packer and Mary Grace Young 1866-1932, daughter of a Burlescombe wheelwright and carpenter. Arthur’s father, William, is specifically mentioned in the baptism book of St Johns Church, Sampford Peverell, as being the first baby to be baptized in the newly restored old font on 29th June 1862! Arthur’s father, William, was the oldest of 4 children of John Pillar 1841-1904, an agricultural labourer from Crediton and Jane Carnell 1834-1889 from Broad Hembury. William had a brother James who also lost a son, Frederick (Arthur’s cousin), during the war.

Arthur’s parents were married in October 1890 and initially lived in Burlescombe. By the time of the 1901 census they were living at Jersey Cottages in Sampford Peverell, on the road that now goes down to the station, with their two sons: Arthur, and his older brother William Henry, born in 1892. In the 1911 census they were living in 'Marchells' at Waterloo Cross, along with their maiden aunt, Charlotte Pillar.  By late 1918, according to the military information, Arthur’s parents had moved to Boobery (2018: the site of 7 Boobery) in Sampford Peverell, and we know from Gregory's Directory that they were still in Boobery in 1923.

Arthur's brother William signed up on 5th September 1914 to the 5th Somerset Light Infantry Regiment, and his cousin, Frederick James Pillar, served in the Coldstream Guards during the war and was killed in action on 13th April 1918.  He also had two second cousins, Ernest and Frederick Tucker, who died in the war. 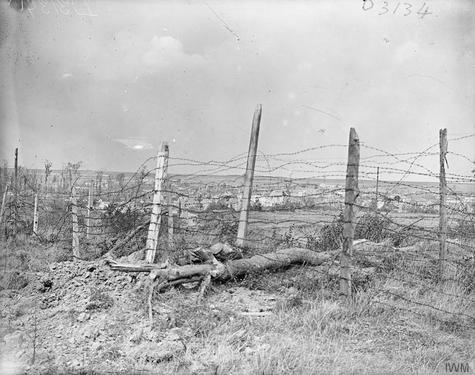 Battle of the Drocourt-Queant Line. Queant, to the NW, of which was the junction of the Hindenburg and Wotan Lines. 7 September 1918. Photo courtesy of the Imperial War Museum
Arthur Pillar would have been called up in the early months of 1918, and after training was sent to France to join the 1st/5th Battalion of the Devonshire Regiment. This battalion had previously served in India, but after the Germans broke through the allied lines after the collapse of Russia, this battle-hardened battalion was sent to France, via Egypt, arriving in Marseilles in June.  The 1/5th Devonshires joined the 185th (2/1st West Riding) Brigade on 6th June 1918, and Arthur Pillar would have joined them soon afterwards.  They were in action almost immediately, taking part in the second battle of Arras and the battles of the Hindenburg Line, also known as the Siegfried Line.  According to cwgc.org these battles were a complex series of operations intended to advance allied formations towards the forward areas of a formidable system of German field defences called the Siegfried (or Hindenburg) Line, which the Germans had just re-garrisoned in a last-ditch attempt to prolong the fighting.

Arthur was wounded and was sent to a hospital but died of his wounds on 13th Sep 1918, aged just 18.  There were a large number of military hospitals around Rouen during the war and most of those who died in one of these hospitals were buried in the St Sever cemetery. There were so many casualties that an extension to it had to be created in 1916, and it is in this extension that Arthur Pillar is buried.  The inscription on his tombstone, "Rest in peace", was chosen by "W.H.Pillar of Boobery, Sampford Peverell".
A memorial service was held for Arthur Pillar in Burlescombe on 22nd September 1917.  The newspaper report of it tell us that “Muffled peals were rung, and the church was filled with relatives and friends.”  His name is inscribed on the memorial tablet which was erected in the church in Burlescombe in August 1919.

According to the list of soldiers’ effects on ancestry.co.uk Arthur’s outstanding pay of £4 17s 11d and a war gratuity of £3 were sent to his father, William, in December 1918.
Details from List of Casualties (under Military Records on Ancestry.co.uk, slightly corrected)

Arthur Pillar is part of this family tree which we have created on ancestry.co.uk and which subscribers can see here:
http://trees.ancestry.co.uk/tree/68538081/family?fpid=32184078937