Tiverton Workhouse, main block in 2001. Photo courtesy of Peter Higginbotham and there is more info on Tiverton Workhouse on his web site: http://www.workhouses.org.uk/Tiverton/
Bertie Scorse was the second child of Alice Scorse, who was born in Sampford Peverell in 1877 - the daughter of Charles Scorse, a railway worker, and Elizabeth, née Trevellyan.  In the 1881 and 1891 censuses they lived in Tiddly Wink cottage in Whitnage Road.

In 1891 Alice, then 14, was a domestic servant at Landside Farm.  When Alice was 16, and single, she had a daughter, Louisa Scorse, born on 28th March 1894 and christened in Sampford Peverell parish church in May that year.  Two years later, and still single, she gave birth to Bertie Scorse on 1st July 1896.  He was born in Tiverton Workhouse, where Alice was living at the time, but he was also christened in Sampford Peverell parish church on 5th August 1896.  He was registered and christened as Bertie, not Albert.  After another two years, on 29th March 1898, Alice gave birth to Arthur Henry Scorse, again in Tiverton Workhouse where she was still (or again) living.

A school admissions list shows that on 10th January 1901 Bertie Scorse was enrolled at Elmore School, Tiverton, the school normally attended by the children from Tiverton Workhouse. A few months later, when the 1901 census was taken, Alice was working as a domestic servant again, this time at Bishops Farm, Stawley in Somerset.  Bertie’s sister Louisa, aged 7, and his brother Arthur, aged 3, were now living with their grandparents, Charles and Elizabeth Scorse, at Easton Cottage, Sampford Peverell, but Bertie, the middle child, aged 4, was left at Tiverton Workhouse and he seems to have stayed there until he was a teenager.  One has to wonder why his grandparents were unable to take him in.

Towards the end of 1903 Alice married Charles Tucker and had three children with him: Elsie, Ernest and Francis.  Charles Tucker died in 1908, and the following year she married Francis Brice.  In the 1911 census Alice and Francis Brice were living at Lands Mill, Halberton, with her children Arthur Scorse, then 13, the three Tucker children, and an 8 month old baby, Gladys Brice.  Her oldest daughter, Louisa Scorse, was a general servant at Houndsmoor, Uplowman. 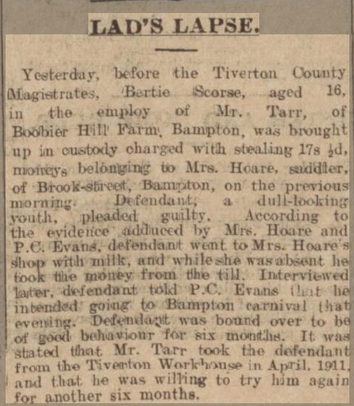 See note (1) for source
Bertie, however, was still in Tiverton workhouse.  He left it that same year, as we know from a newspaper article which appeared in the Exeter and Plymouth Gazette on 16th November 1912.  It reports that

“Yesterday, before the Tiverton County Magistrates, Bertie Scorse, aged 16, in the employ of Mr. Tarr of Boobier Hill Farm, Bampton, was brought up in custody charged with stealing 17s 1/2d, moneys belonging to Mrs. Hoare, saddler, of Brook Street, Bampton, on the previous morning.  Defendant, a dull-looking youth, pleaded guilty.  According to the evidence adduced by Mrs. Hoare and P.C. Evans, defendant went to Mrs. Hoare’s shop with milk, and while she was absent he took the money from the till.  Interviewed later, defendant told P.C.Evans that he intended going to Bampton carnival that evening.  Defendant was bound over to be of good behaviour for six months.  It was stated that Mr. Tarr took the defendant from the Tiverton Workhouse in April 1911, and that he was willing to try him again for another six months.”

​It seems surprising that he got off so lightly; perhaps the magistrate felt sorry for him. 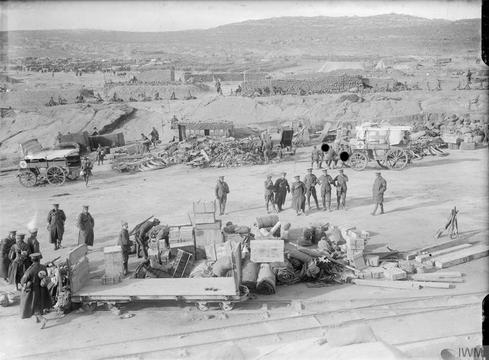 British troops preparing for evacuation at "A" West Beach, Suvla Bay, Gallipoli, 17 December 1915. Photo courtesy of the Imperial War Museum.
Bertie’s younger brother Arthur enlisted in the Army in late 1914, and Bertie must have signed up soon afterwards.  Arthur was killed in action in Mesopotamia in March 1917.

Bertie Scorse enlisted at Barnstaple and joined  the Royal North Devon Yeomanry (service number: 2326).   Initially, according to www.longlongtrail.co.uk http, the North Devon Yeomanry was a ‘mounted’ brigade, but in October 1915 they ‘dismounted’ and moved to Gallipoli, so Bertie would have gone there with them. This is confirmed by his medal card, which says he first entered the “2B” theatre of war on 23rd September 1915.  2B was the code for Balkans – Gallipoli (see http://www.greatwar.co.uk/places/ww1-theatres-of-war.htm ).  Gallipoli was the scene of fighting between Allied and Turkish troops between April 1915 and January 1916, and is where the ANZAC (Australian and New Zealand) troop first took part in the Great War.  British politicians thought it would be a ‘back door’ into Germany, but it turned into a disaster, resulting in massive losses on both sides, and a diversion of troops and supplies from the Western Front.  The Long Long Trail website describes the end of 1915, when Bertie was there, as follows:

​“Conditions on Gallipoli defy description.  The terrain and close fighting did not allow for the dead to be buried.  Flies and other vermin flourished in the heat, which caused epidemic sickness.  In October 1915, winter storms caused much damage and human hardship, and in December, a great blizzard – followed by cataclysmic thaw – caused casualties of 10% (15.000 men) throughout the British contingent, and no doubt something similar on the Turkish side.  Of the 213,000 British casualties on Gallipoli, 145,000 were due to sicknes; chief causes being dysentery, darrhoea, and enteric fever.”

The British and Allied troops all left the area by 9th January 1916. 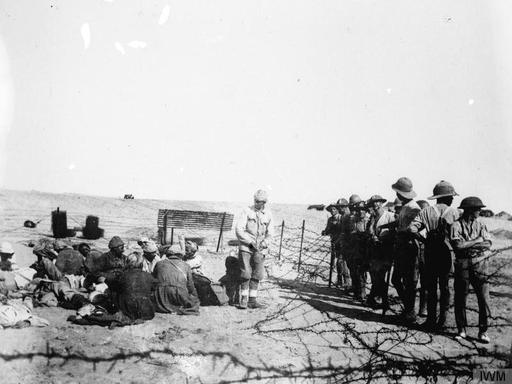 A view of the landscape south-west of Gaza, 1917. Photo courtesy of the Imperial War Museum.
Bertie survived Gallipoli, and his section withdrew back to Egypt on 30th December 1915.  In early 1916 they were absorbed into the 2nd Dismounted Brigade, and were then merged with another group to form the 16th Battalion of he Devonshire Regiment (at which point Bertie was given service number 345727), under the command of the 229th Brigade, which became part of the Egyptian Expeditionary Force.  In 1917 they took part in the 2nd and 3rd battles of Gaza, and then the capture of Jerusalem, in what was then Palestine.

Palestine was part of the Turkish empire.  Allied forces entered Palestine in December 1916 and over the course of the next twelve months they advanced towards Jerusalem.  By 21st November 1917 they were about 5 kilometres west of the city, and very severe fighting followed, lasting until all the city’s defences were captured on 8th December.  Bertie Scorse was killed in action just a few days before this on 3rd December 1917, aged 21. Another Sampford Peverell casualty, Frederick Thomas, died at the same place on the same day.  Bertie is buried in grave A31 in the Jerusalem war cemetery, where 2515 Commonwealth casualties are buried.  The register of his gravestone suggests that they did not know his age or next of kin (perhaps he didn’t either), so no personal inscription was used.

The list of soldier’s effects on ancestry.co.uk shows that in June 1918 Bertie’s outstanding pay of £10 7s 4d was sent to Mrs. Lydia Leaworthy, his sole legatee, as was his war gratuity of £13 10s.  In the 1911 census Mrs. Leaworthy was a 49-year-old “sick maternity nurse” at the Tiverton workhouse, so perhaps she was a mother figure for Bertie.  Let’s hope he experienced some affection in his short and eventful life. 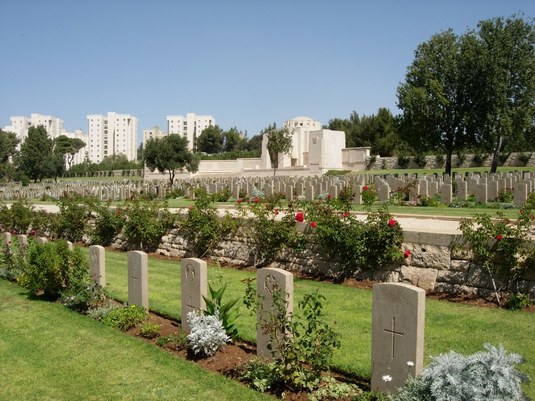 The Jerusalem War Cemetery. Photo courtesy of the Commonwealth War Graves Commission.
(1) Article from the Exeter and Plymouth Gazette 16 Nov 1912:  Image reproduced with kind permission of The British Newspaper Archive (www.britishnewspaperarchive.co.uk) ’.  Image © THE BRITISH LIBRARY BOARD. ALL RIGHTS RESERVED. It can be found at  link to page
Details from List of Casualties (under Military Records on Ancestry.co.uk, slightly corrected)

Bertie Scorse is part of this family tree which we have created on ancestry.co.uk and which ancestry subscribers can see here:
http://trees.ancestry.co.uk/tree/75095332/family