Charles Harold Wallington was born in Horfield, NW Bristol, in January 1882. He was the fourth of the six children of Charles Wallington and Bright Jordan. His father’s family came from Wotton-under-Edge in Gloucestershire, where they ran the local wine and spirits shop for several generations, and his mother was the daughter of a single mother and was born in Worcestershire. She grew up in her grandmother’s boarding house in Great Malvern and was married in 1874, aged 20, to Charles Wallington (senior), who was a draper’s assistant. Charles then became a commercial traveller for the drapery firm before a dramatic career change in the 1880s when he joined the clergy and became Reverend Charles Wallington. Tragically he died aged 37, leaving his widow with six young children.

The widowed Bright Wallington moved with her children from the outskirts of Bristol to Dawlish in Devon, where she ran a boarding house for about 20 years – just like her grandmother had done in Great Malvern, Worcestershire.  Bright would have been very familiar with the workings of a boarding house having been brought up in one. 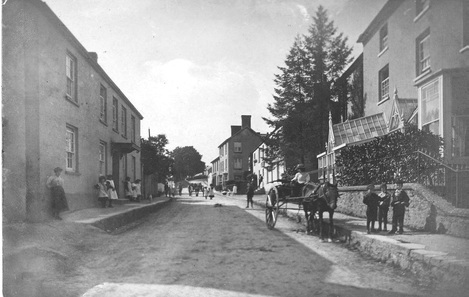 Morrells House (left), Lower Town, in the early 1900s
Some time before 1911 Bright Wallington left the boarding house in Dawlish and moved to “Morrels House” on Lower Town, Sampford Peverell – just opposite the Globe Inn. The house became a girl’s boarding school, with her daughter, Dorothy, being the schoolmistress.

Charles Harold Wallington, however, did not move to Sampford Peverell. Instead he moved to London where he was working as a butcher’s assistant in the 1901 census, near Carnaby Street, and by 1911 he was a Butcher’s manager, working in the Strand but living at Charing Cross.

In July 1912, in Barnet, Middlesex, Charles married Gladys Putnam. Gladys was born in 1888 so was 6 years younger than her husband. While he was in the army his wife lived at 166 Hoppers Road, Winchmore Hill, London, N21[1].  They did not have any children and she never re-married. Gladys died in 1971 aged 83, staying in Middlesex all her life.

Charles had an older brother, William, who enlisted in 1915. At the time, William was a bank cashier working in Cardiff and was 39 years and 3 months old when he joined up in Dec 1915, having “given away” his sister Florence in June that year when she was married to Mr Trevor Matthews at St John’s Church, Sampford Peverell.  Two of Florence’s sisters were bridesmaids, along with the sister of the bridegroom, and the reception was held in Morrells, the home of the bride’s mother.  Charles and his wife Gladys may well have been at the wedding. 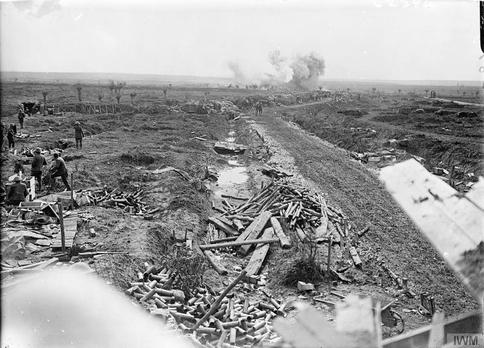 A view of the newly captured ground taken from the main road to Zonnebeke during the Battle of the Menin Road Ridge, 20 September 1917. Shells can be seen bursting in the distance. Photo courtesy of the Imperial War Museum.
Charles appears to have enlisted early in 1917, aged 35, joining the Devonshire Regiment. By June he had been promoted from Cadet to acting second Lieutenant. He went to the front in Belgium in August 1917 where he was attached to the 1st/6th battalion of the King’s Liverpool Regiment. They in turn were attached to the 165th (Liverpool) Brigade of the 55th (West Lancashire) Division.  Between 20th and 23rd September 1917 this brigade took part in the battle of Menin Road Ridge, part of the third battle of Ypres (also known as Passchendaele).  In the battle of Menin Road Ridge alone, between 20th and 26th September over 20,000 Allied and over 25,000 German troops were killed or injured.  The report of the action on 20th September from the Commonwealth War Graves Commission reads:

"Wet through by overnight rain the infantry were on their start positions by early morning of 20 September. At 5.40am 65,000 troops advanced on an eight mile front, screened by heavy mist and a stupefying bombardment. Keeping close to the barrage, the initial rush, across slippery ground, quickly overran enemy outposts; retaliatory fire strengthened and skilful fighting was needed to negotiate surviving strongpoints. By midday the four attacking Divisions on the Gheluvelt Plateau were on their final objectives. The simultaneous attack by Fifth Army kept up alongside on the left.  The newly won positions were consolidated in anticipation of expected German counter-attacks. Clear afternoon weather offered reconnaissance flights near perfect visibility; German threats were quickly spotted and between noon and 7.30pm numerous counter-attacks were dispersed by viciously accurate British barrages. By evening the battle-ravaged forward slopes of the Gheluvelt Plateau were in British hands." 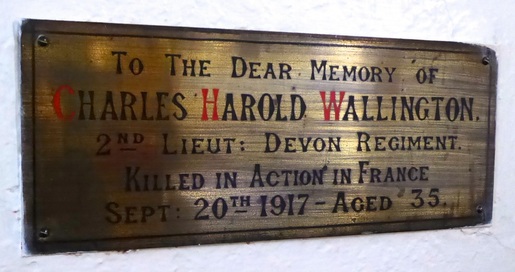 Charles Wallington's plaque in Sampford Peverell parish church. Photo supplied by the Sampford Peverell Society, 2014.
The casualties that day included Charles Wallington who was killed in action, aged 35, having being at the front for just one month.  His death was reported in the local newspapers on 5 Oct and a memorial service was held for him at St John’s church, Sampford Peverell on 7th Oct 1917.  A local newspaper reported that “muffled peals were rung on the bells at the close of the service, and the Dead March was played by the organist”.

Charles Wallington is remembered on this individual plaque in Sampford Peverell parish church, which was probably paid for by his mother and sisters. 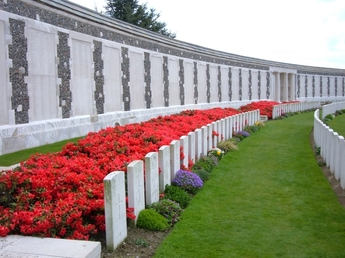 The Tyne Cot Memorial Cemetery. Photo courtesy of the Commonwealth War Graves Commission.
Like fellow Sampford Peverell men Percy Bradfield, Robert Hine, and Wilfred Taudevin, Charles Wallington is commemorated at the Tyne Cot Memorial in Zonnebeke, Belgium, where his name is on stone 38. The Commonwealth War Graves Commission website describes the Tyne Cot Memorial as “one of four memorials to the missing in Belgian Flanders which cover the area known as the Ypres Salient… It bears the names of almost 35,000 officers and men whose graves are not known.”
Details from List of Casualties (under Military Records on Ancestry.co.uk)

He is part of this family tree which we have created on ancestry.co.uk and which ancestry subscribers can see here:
http://trees.ancestry.co.uk/tree/74092134/family?cfpid=38282810618

Information about the 55th (West Lancashire) Division from the Long Long Trail: http://www.longlongtrail.co.uk/army/order-of-battle-of-divisions/55th-west-lancashire-division/

Information about the battle of Menin Road Ridge from the Commonwealth War Graves website: http://www.cwgc.org/ypres/content.asp?menuid=36&submenuid=38&id=23&menuname=Menin%20Road%20Ridge&menu=subsub