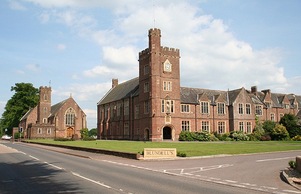 Blundell's School, Tiverton
Frederic Vyvyan Coupland Smith was born early in 1897 in Steyning, Sussex.  He was the only child of Frederic Geoffrey Coupland Smith (1871-1924), and Ida Mary Ruffell (1870-1951), who married in Q1 1895. Frederic Smith senior (Frederic V’s father) was the son of a surgeon, also called Frederic Smith, who came from a wealthy farming family, and his wife Harriett (née Coupland).    Frederic senior later adjusted his and his family’s surname by connecting his middle name, Coupland, to the surname, Smith, to form Coupland-Smith.

The Coupland-Smith parents were well to do and did a lot of travelling, though not necessarily together.  In the 1901 census the father, Frederic G Smith, was visiting his widowed mother in Nottinghamshire, and his wife, Ida Mary Smith, was having a spa break at the Smedleys Hydropathic Company in Matlock.  We’re not sure where 4-year-old Frederic V was staying at the time.  In October 1903 Mrs F G Coupland-Smith was on the passenger list of a Bibby Line ship travelling from Liverpool to Marseilles.

An article in the Cheltenham Chronicle in July 1917 records that Frederic was educated at Ayshford School in Uffculme and Blundell’s, a public school in Tiverton.  He attended Blundell’s from September 1909 to summer 1913.  Their website:

has a page about Frederic which records that “He entered “Old House” when he first came to the school at the age of 13 years. He boarded at various times in his school life; 1909 to 1910 and again in 1912 and in 1913; at the other times he was a “Day Boy”.  He was, most of the time, a member of the Choir. He studied the Classical side and intended to take [Holy] Orders, but left rather prematurely to accompany his parents to the Holy Land and Egypt in the summer of 1913.” 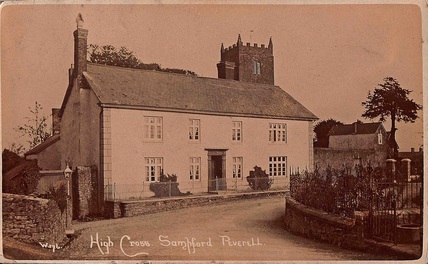 High Cross House c. 1912
The period when he was a day boy covers the period when his parents were based in Sampford Peverell.  A newspaper article published on 3rd November 1910 lists Mr and Mrs Coupland-Smith among the mourners at the funeral of the local vicar, Rev P C Rossiter.  In the 1911 census Frederic Geoffrey Coupland-Smith, 39, and his son, Frederic Vivian, were living in High Cross House in Sampford Peverell, a house with 14 rooms.  Frederic G had private means and they had a cook/servant and a groom.  Frederic V’s mother was not there at the time.  We know from the Land Tax Returns that Frederick Coupland-Smith senior rented High Cross House from Mrs Rossiter until 1914.  Shipping passenger lists show that Frederic Coupland-Smith senior travelled, unaccompanied, to Cape Town, South Africa, in December 1911, to Lima in Peru in December 1912 (when he’s described as a ‘merchant’), and from Chile to London in May 1913.

As we have seen, Frederic left Blundell’s in the summer of 1913, and the Cheltenham Chronicle article reported: “At an early age he showed a desire to enter the Church, and on leaving Blundell’s was coached by Mr Butler, of Cheltenham, and in the ordinary course would have gone up to Merton College, Oxford, in October 1914. But on the declaration of war he joined up, serving in the ranks for a month and then receiving a commission in the RFA.  Afterwards he was sent to the Dardanelles, Egypt, Serbia, and finally to another front.” 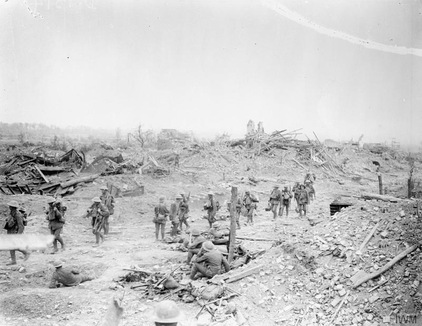 Village of Wytschaete, near Lone Tree cemetery, captured on 7th June 1917. Photo courtesy of the Imperial War Museum
Frederic’s medal card shows that he initially joined the 54th brigade of the Royal Field Artillery, and the first theatre of war he served in was Egypt, in July 1915.  He was made a temporary Second Lieutenant on 29th September 1914 (London Gazette).

The Long Long Trail website tells us that “this brigade sailed from Devonport on 7th July 1915 for operations in the Mediterranean, and arrived at Alexandria in Egypt two weeks later.  It moved to Mudros, the forwards base for operations at Gallipoli, arriving on 11 September 1915 but did not proceed into that theatre of war.  It left Mudros on 5 October 1915 and arrivced at Salonika 10 October (the ammunition column followed a little later).“

Meanwhile Frederic’s father became an orderly with the British Red Cross Society, at the age of 44, serving initially in France from 10th August 1915, and later in Greece where he served until 19th August 1917.  Given his age and background this was an extraordinary thing for him to do.  He was in Salonika when his son died.

At some point Frederic V joined 173rd brigade RFA.  He was promoted to Lieutenant on 2nd July 1917, but the relevant announcement in the London Gazette in December recorded that he had since been killed in action. He is buried at the Lone Tree Cemetery, Heuvelland, West-Vlaanderen, in Belgium.  Lone Tree Cemetery is close to the Lone Tree Crater, one of the nineteen bomb craters which were made immediately before the infantry attack at the Batle of Messines in early June 1917.  The crater is now designated a 'Pool of Peace'.  Nearly all the graves in the cemetery are those of soldiers who fell on the first day of the battle on 7th June but there are also a few men who died between 30th June and 5th July, including Frederic V Coupland-Smith.

As well as his headstone in France, his name is engraved on the war memorial at Blundell’s school and on a memorial stone in Retford, Nottinghamshire, at the foot of the grave of his grandparents. 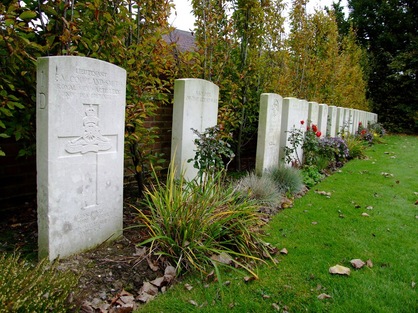 Frederic Coupland-Smith is part of this family tree which we have created on ancestry.co.uk and which subscribers to ancestry can see here:
http://trees.ancestry.co.uk/tree/73887918/family?cfpid=46284725631

Information about the Royal Field Artillery from the Long Long Trail :http://www.longlongtrail.co.uk/?s=rfa+units

Information about his school and army career from Blundell's School: http://www.blundells.org/archive/in-memoriam/coupland-smith_fv.html

London Gazette item about his promotion to Lieutenant, 22 Dec 1917