​Frederick Thomas was born on 3rd December 1886 and baptised in Sampford Peverell Church on the 19th December, along with his brother Walter, born 18 months previously. They were the sons of William Thomas, an agricultural labourer, and his wife Louisa, of “Ridge” (described as “High Ridge” on the 1891 Census), a farm at the northern edge of the parish.

By 1901, Frederick, now 15, was a farm servant working for – and living with – Alfred Shattock and his family at Stallenge-thorne Farm, between Huntsham and Hockworthy. Perhaps farm work was not to his liking – or he sought a more adventurous life – for at some point before 1911 he joined the Army, enlisting with the 2nd Battalion, the Devonshire Regiment. The 1911 Census finds him at a large military establishment in Malta.

On 3rd November 1913 Frederick married Ellen Hicks (known as “Nellie”) in Uplowman. Nellie was the daughter of Henry Hicks, an agricultural labourer, and his wife Sarah. She was born on 11th September 1895 and was baptised in Sampford Peverell on 8th December. By 1901 the family had moved to Whittenhayes, Bampton, but in 1911 she was living with her brother Albert, a farm labourer, at Charles Cottages, Kittisford (near Wellington). As Frederick was already in the army his service card records that he entered WW1 service on 22nd August 1914, in the 1st Battalion of the Devonshire Regiment. This battalion landed at Le Havre on 21st August. We cannot be sure where or when Frederick served for the next few years, or whether he was able to return home on leave to see his family. Fred and Nellie had one child – a daughter, Lizzie Ellen – who was born on 15th February 1915 and was baptised in Sampford Peverell on 3rd April 1915. Nellie’s brother Benjamin, from Uplowman, was killed in action in Flanders on 21st April 1915. 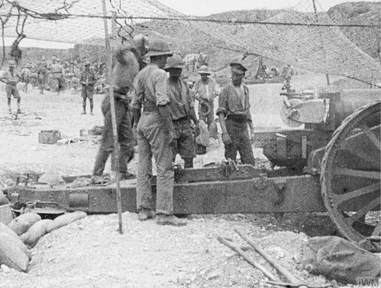 Photo courtesy of the Imperial War Museum. Palestine Campaign. Heavy Howitzers in action before Gaza. July-November, 1917
In 1916 the 16th Battalion of the Devonshire Regiment came under the command of the 229th Brigade, which became part of the Egyptian Expeditionary Force. In 1917 they took part in the 2nd and 3rd battles of Gaza, and then the capture of Jerusalem, in what was then Palestine, which was part of the Turkish empire.
​
At the time of Frederick's death, the EEF, under General Edmund Allenby, and supplemented by a large Indian army contingent and ANZAC mounted troops, had broken through Ottoman defences and advanced towards Jerusalem.  By 21st November 1917 they were about 5 kilometres west of the city, and very severe fighting followed, lasting until all the city’s defences were captured on 8th December.  ​ 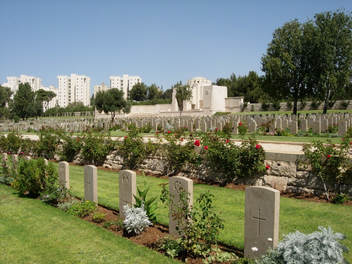 The Jerusalem Cemetery. Photo courtesy of the Commonwealth War Graves Commission.
Frederick Thomas was killed in action just a few days before this on 3rd December 1917, as was Bertie Scorse, another Sampford Peverell casualty.  Frederick died on his 31st birthday and is buried in grave A14 in the Jerusalem war cemetery, where 2515 Commonwealth casualties are buried.  The inscription on Frederick's gravestone, chosen by his widow, is "Them asleep in Jesus will God bring so shall we ever be with the Lord".
At some point after Lizzie's birth in 1915, Nellie moved to Tiverton, where her address (shown on the Commonwealth War Graves Commission Debt of Honour record) was 9, Curwood Court, Westexe.  She received a (significant at the time) war gratuity of £19 in addition to his outstanding pay.  Nellie died in 1933, aged 38.
Details from List of Casualties (under Military Records on Ancestry.co.uk, slightly corrected)

Frederick Thomas is part of this family tree which we have created on ancestry.co.uk and which ancestry subscribers can see here: https://www.ancestry.co.uk/family-tree/tree/116744290/family

Information about the Devonshire Regiment from The Long Long Trail: http://www.longlongtrail.co.uk/?s=devonshire+regiment