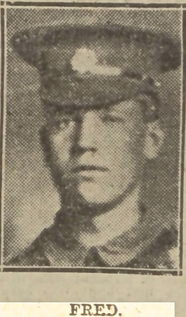 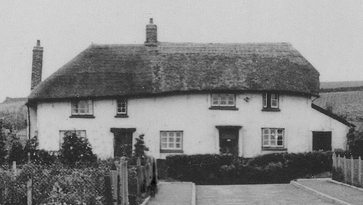 Smoke Alley cottages in the 1960s
In the 1901 census the family was living in ‘Smoke Alley’, one of a pair of adjoining cottages in Boobery (2018: 22-24 Boobery). These cottages were owned by the Trustees of the Poorlands Charity and were let out at a 'market' rent in order to provide an annual income to distribute among the poor of the Parish. The Tuckers' cottage was actually let to John Bowden, a prominent local farmer, for whom Richard Tucker undoubtedly worked.  Judging by the censuses and Land Tax Returns, the Tucker family continued to live in Smoke Alley until around 1917 so it was the home of the Tucker boys throughout their childhood, probably in the right-hand (easterly) cottage.

In 1907, when Frederick was 10, his mother died after childbirth and was buried on 15th October with her two-day-old baby boy, who was placed in his mother's coffin.  The funeral was reported in the Sampford Peverell section of the Exeter and Plymouth Gazette as follows:  “There was a large assembly at the funeral of Mrs Richard Tucker who with her two days’ old baby, was interred in the parish churchyard on Wednesday.  All Mrs Tucker’s sisters and brothers-in-law followed the coffin, as well as the bereaved husband and six children, the latter all under the age of 13 years.  The deceased was the daughter of Mr and Mrs Cotty, who are old and respected inhabitants.”

It must have been a very difficult time for the family, but a few years later, on Feb 11th 1911, Richard remarried.  His new wife was a widow, Annie Wotton.  In the 1911 census they were still living in Boobery with Frederick (now a yard-boy) aged 14, Ernest, 12, Gussie (Augusta), 11, Arthur, 7, and Florrie (Florence), 6, all born and christened in Sampford Peverell.  Their home is described on the census as having three rooms, including the kitchen.  Their oldest brother Herbert John was now working as a farm boy for the Dennis family at Jurishayes near Tiverton. 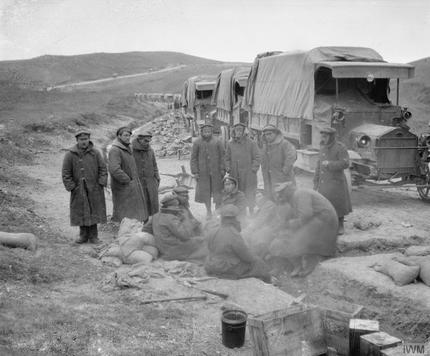 A convoy of lorries from 689 Motor Transport Company (ASC) halted on the Seres Road whilst the drivers have a tea break, ca.1917. Photo courtesy of the Imperial War Museum.
We don’t have a service record for Frederick, but we know he enlisted and, like his brother Ernest, became a driver in the Royal Army Service Corps.  At some point Frederick was sent to Salonika in Greece, as was Ernest, and the two brothers must have been there at the same time for a while between late 1916 and late 1917.

There is a lot of detail about Salonika on the Long Long Trail website which gives this summary of events there in 1917:

“During 1917 there was comparatively little activity on the British part of the front in Macedonia, due in part to complex political changes in Greece throughout the year. The main fighting took place around Lake Doiran, where the line was adjusted several times by each side early in the year. In April 1917, the British attacked, gained a considerable amount of ground and resisted strong counter-attacks. In May, the Bulgarians attacked the British positions, but were firmly repulsed. The British action in May triggered a series of attacks elsewhere on the front by the other Allies, known as the Battle of Vardar." 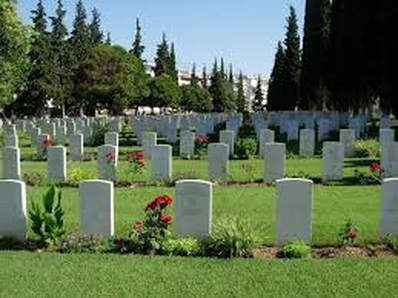 The Salonika (Lembet Road) military cemetery
In September 1917 a newspaper reported that Mr Richard Tucker heard that his second son Frederick had died of fever in Mesopotamia, possibly a mistake for Macedonia as the Commonwealth War Graves registration document records that Frederick died of malaria on 5th September 1917 in Salonika, in Greece, officially aged 23 but we know he was actually aged 20.  It also tells us that his headstone information is: “God has called him to his eternal rest. Mr R Tucker, Ashford Court, Sampford Peverell, near Tiverton”. 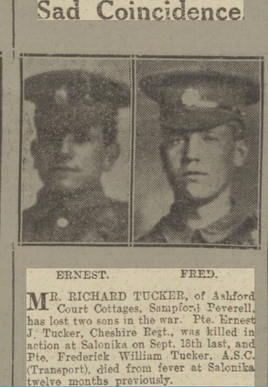 Image © Local World Limited. Image created courtesy of THE BRITISH LIBRARY BOARD.
Image reproduced with kind permission of The British Newspaper Archive: link to page at www.britishnewspaperarchive.co.uk for those reading this on the internet.
﻿
Details from List of Casualties (under Military Records on Ancestry.co.uk)

Frederick Tucker is part of this family tree which we have created on ancestry.co.uk and which ancestry subscribers can see here:
http://trees.ancestry.co.uk/tree/74511558/family?cfpid=46297950557

Information about Salonika in WW1 from the Long Long Trail website: http://www.longlongtrail.co.uk/?s=salonika