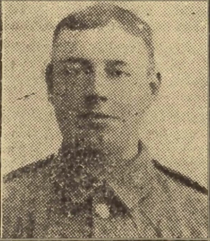 Pte Henry Heyward. For source & acknowledgements see the full article below.
Henry Thomas Heyward (written as Hayward in some documents) was born on 21st December 1890 in Burlescombe and was the 6th of 10 children (2 boys, 8 girls) of Thomas Heyward (1859-1947) from Bampton, an agricultural labourer who eventually became a cowman, and his wife Louisa Holley (1859-1936) from Butterleigh. Henry Heyward's grandparents and great-grandparents all came from the Bampton area.

Henry’s parents, Thomas and Louisa, married in 1880 and their first 5 children were born in Somerset, in and around Wiveliscombe. The family then moved in around 1890 to the first of the row of five terraced cottages at Ayshford, Burlescombe, right next to the canal. We believe that Thomas Heyward worked at Pugham farm which is half a mile to the east of Ayshford. Henry was baptized in Sampford Peverell church on 18th January 1891.

In 1896, the family moved half a mile north-west across the canal to Landside Cottage, which is in the parish of Sampford  Peverell. They were still living at Landside Cottage in the 1901 census, by which time they had 9 children. In 1901 Henry’s older sister Emma Louise was a servant to the Pearce family at Boehill Barton, and Henry’s elder (and only) brother, William James Hayward, born 1883, was an apprentice blacksmith working for Leon Arthurs at the Smithy, Lower Town, Sampford Peverell. The 10th and last child, Ida Minnie, was born in 1904. 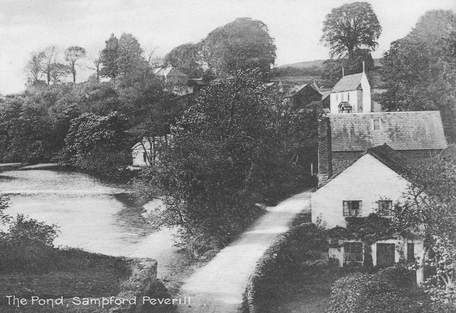 Mill House, in the foreground, c 1905
1907 saw the marriage of Henry’s brother William to a Somerset girl called Bessie.  They had a daughter, Ethel May, in 1910, and by the time of the 1911 census he was living in Canington, Bridgwater, Somerset working as a Blacksmith. 1907 was also the year that Henry’s sister Emma died at the age of 22.  She was buried in Uplowman on 25th October 1907.

By 1911 the family had moved to Mill House (2018:  23 Higher Town) in Sampford Peverell. The father, Thomas, was a cowman, while his son Henry Thomas, then aged 20, was single, lived with his parents and was an agricultural labourer.  Henry’s sister Harriet married Ernest Kerslake that year and they went on to have four children, all born in Sampford Peverell.  Another sister, Lily, emigrated to Canada that same year with Wilfred Pillar who was also from Sampford Peverell.  They married and settled there.
A newspaper report tells us that on Boxing Day 1914 Henry, referred to as “Harry”, was best man at the wedding of his sister Polly Jane, who was two years older than Henry.  Polly married Frank Charles Cotton, a fisherman from Dawlish. The bride wore a cream dress and her younger sisters, Dolly and Minnie, were her bridesmaids.  The presents were described as “very good and useful” and ”the sun shone brilliantly during the ceremony”.  The marriage was to be short-lived; Frank Cotton started active service in France on 25th July 1915 and was killed in Flanders exactly two months later.

Of Henry’s other sisters: we don’t know what happened to Annie, who may have died young; Rosa married William Cork, also from the village, in 1921, and they had three children; and Edith married her cousin Frank Hayward in 1933.
Henry Heyward first entered service in WW1 as a private in the 8th Battalion Devonshire Regiment, and was in France by 1st October 1915.  The local newspaper reported that he was home on leave in February 1917 after being wounded, but he returned to the war.  We know that in 1917 he was still in the 8th Devonshires in ‘C’ company. This battalion was part of the 20th Brigade of the 7th Division, whose men took part in the third battle of Ypres, also known as Passchendaele, infamous for the terrible mud and for the scale of casualties.  According to the BBC history web site (http://www.bbc.co.uk/history/worldwars/wwone/battle_passchendaele.shtml) “The infantry attack began on 31 July. Constant shelling had churned the clay soil and smashed the drainage systems. The left wing of the attack achieved its objectives but the right wing failed completely. Within a few days, the heaviest rain for 30 years had turned the soil into a quagmire, producing thick mud that clogged up rifles and immobilised tanks. It eventually became so deep that men and horses drowned in it. 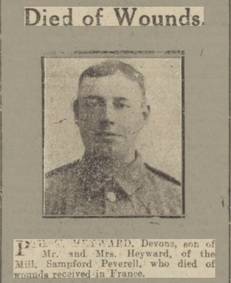 From The Western Times, 01 Feb 1918 [1]
On 16 August the attack was resumed, to little effect. Stalemate reigned for another month until an improvement in the weather prompted another attack on 20 September. The Battle of Menin Road Ridge, along with the Battle of Polygon Wood on 26 September and the Battle of Broodseinde on 4 October, established British possession of the ridge east of Ypres”.  In total about five miles were gained but: “it had taken over three months, 325,000 Allied and 260,000 German casualties”.

According to a newspaper report Henry’s parents were initially informed that he was in hospital suffering from shell shock, but they were later told that he died of wounds in hospital in the Boulogne area, the site of many of the military hospitals, on 7th October 1917.  The log of the village school for that day recorded that: “News has come from France that Henry Heyward has lost his life in the advance now being made by Sir Douglas Haig.  He, together with Walter Gale and Robert Hine, attended this school in the early years of this century.” 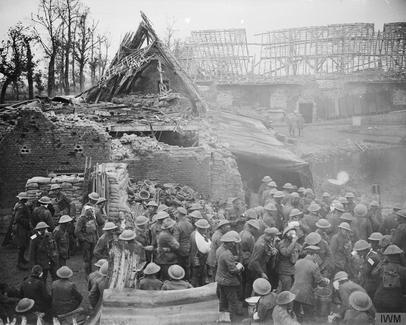 Wounded soldiers at a RAMC dressing station on a ruined farm near Wieltje, on the road to Broodseinde, 5 October 1917. Photo courtesy of the Imperial War Museum.
An article in the Devon and Somerset News on 8th November 1917 reported: “Concerning the death of Private H. Heyward, of Sampford Peverell, his sister has received several letters from France.  The chaplain at a hospital sends his sympathy, and says the grave will be cared for.  The sister in charge says the deceased was quite unconscious when admitted.  Everything was done, but all was of no avail.  She also sends her heartfelt sympathy.”

Henry Heyward was later awarded the MM (Military Medal) for bravery, as recorded in the London Gazette on 28th January 1918.  We do not know exactly why it was awarded to him (most of the WW1 citations were lost) but the Military Medal was awarded to 'other ranks' of the British Army and Commonwealth Forces, the equivalent for officers being the Military Cross. The MM was an award for gallantry and devotion to duty when under fire in battle on land. On the reverse of the medal is inscribed “For Bravery in the Field”.

Henry died on 7th Oct 1917, aged 26,  and is buried in the Godewaersvelde British Cemetery in France, near the Belgian border.  The inscription chosen by his mother, engraved at the foot of his headstone, is  “Peace perfect peace”.
[1] Image © Local World Limited. Image created courtesy of THE BRITISH LIBRARY BOARD.
Image reproduced with kind permission of The British Newspaper Archive: link to page
Details from List of Casualties (under Military Records on Ancestry.co.uk, slightly corrected)

Henry Heyward is part of this family tree which we have created on ancestry.co.uk and which subscribers to ancestry can see here:
http://trees.ancestry.co.uk/tree/52965763/family?fpid=13445951081

More information about Passchendaele can be found on this BBC website: http://www.bbc.co.uk/history/worldwars/wwone/battle_passchendaele.shtml

The award of the Military Medal for bravery in the field is listed in the London Gazette of 28th January 1918, in a long alphabetical list starting on page 1378.  Henry Heyward is listed on page 1388:
https://www.thegazette.co.uk/London/issue/30498/supplement/1388