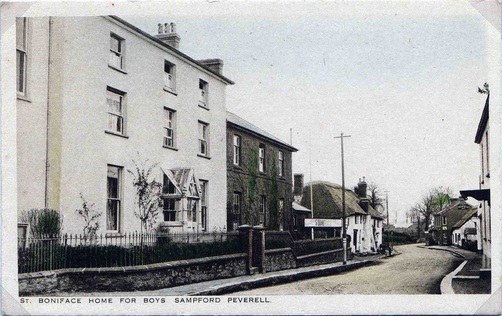 St Boniface's Home, Lower Town, Sampford Peverell
Matthew Richardson Bell was born in Denmark Street, Westoe, South Shields, on 1st December 1895.  His sister Miriam was born two years earlier in April 1893.  They were the children of William Bell (born in 1859, the son of a coalminer, in Mickley, Northumberland) and his wife Margaret (née Hicks).  Matthew was probably named after a relation of the family named Matthew Richardson, an innkeeper and licensed victualler.

On the 1901 census the Bell family were still living in Denmark Street, South Shields, where William was described as a barman; Miriam was aged 7 and Matthew was 5.  They had Margaret's relative Septimus Hicks, a 24-year-old joiner, living with them as a boarder.

Two years later tragedy struck the family:  Matthew’s father William died in 1903, when Matthew was just 7 and his sister 9 or 10.  Much of the following information was kindly provided to us by the Children's Society (formerly known as the Church of England Children's Society, and before that as the Waifs and Strays Society) either by letter or via their web site: http://www.hiddenlives.org.uk

According to this information Matthew’s mother fell into debt and was in increasingly ill health; because of this she was unable to work and she had no relatives able to help (they had children of their own to look after).  As a result of these circumstances, an application was made for Matthew to be looked after by the Waifs and Strays Society.  Matthew was initially sent to the Bersted Home for Boys in Bognor, which housed boys aged 8 to 14, but it closed down in August 1907 and all the boys were transferred to the newly opened St Boniface Home for boys in Sampford Peverell, which also took boys up to the age of 14.  Frank Ensor, another casualty, was also transferred from Bognor to St Boniface's at the same time.  In that same year, on 6th May 1907, Matthew’s mother, Margaret, passed away and by 1911 his sister Miriam was at the All Saints Home for Girls, Hawley, Blackwater, Hampshire, run by the Sisters of Mercy, where she was in training to be a kitchen-maid.

Matthew was at St Boniface Home from 21st August 1907 until 19th November 1909.  From there he was found a place as a domestic gardener with the Revd William Whittley at Towednack Vicarage, St Ives, Cornwall, where he was working in 1911.  We know from his naval service record that he joined the Royal Navy in May 1912 as a 16-year-old boy on the training ship HMS “Impregnable”.

St Boniface residents c 1908. Matthew Bell may well be one of the boys in this photo, many of whom would have taken part in the war. Photo courtesy of Peter Higginbotham. 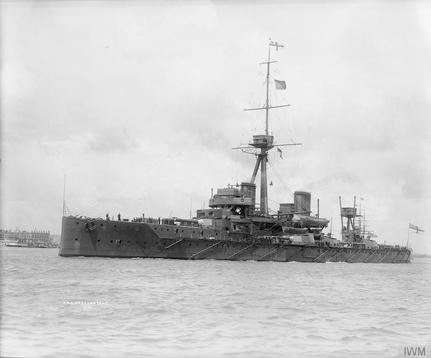 HMS Dreadnought in 1914, when Matthew Bell was a crew member. Photo couresy of the Imperial War Museum
Matthew's training continued for the next two years on other ships or shore-based training establishments – “Ganges”. “Donegal” and “Victory” – before his naval service proper began on his 18th birthday, 1st December 1913 on HMS “Dreadnought”.  According to his service record he had grown two inches in those two years, and was now 5' 10½", with brown hair, grey eyes, and a fresh complexion.  He was still on the “Dreadnought” when war was declared in 1914 and remained with her as an Able Seaman until April 1915.  Thereafter he served on “Excellent” (April to August 1915) and “Attentive II” (September 1915 to February 1916), an Adventure-class scout cruiser which mainly operated with the Dover Patrol.  The Dover Patrol had a wide variety of jobs in the Southern North Sea and the Dover Straits including carrying out anti-submarine patrols, escorting merchantmen, hospital and troop ships, laying sea-mines, constructing mine barrages, sweeping up German mines, bombarding German military positions on the Belgian coast and sinking U-boats.  Finally, on 1st March 1916 he transferred to HMS M25, a 'Monitor' (M15) Class vessel.

After the outbreak of war in 1914 the magazine of the Waifs and Strays Society started issuing a periodical Roll of Honour naming former residents of Homes (those they heard about) who were then serving in the armed forces.  M.R.Bell was named in December 1914 and January 1915, as being on HMS Impregnable.  In 1915 he was just listed as being in the Royal Navy, and in the last list we have, issued in December 1916, he is listed as "HMS Monitor (killed)".  From his service record we know he was actually on M25, a 'monitor' class ship.

Part of the 1916 Roll of Honour maintained by the Waifs and Strays Society.
The Waifs & Strays Magazine for February 1917 included an item headed ‘Sampford Peverell’ recording that “Matthew B is on the ever-growing list of those on our Roll of Honour who have laid down their lives for King and country.  He met his death in rather an unusual way.  While serving on HMS M- he was assisting to load a cargo of gas cylinders for France, when by some accident an escape took place, and Matthew got the full force of it.  He was treated in hospital, then discharged and died at his sister's house”.

Matthew died in a house in Stanley, Durham, occupied by a coalminer named John Plews - maybe Matthew's sister also lived there, or was in service nearby.  His service record on findmypast.co.uk indicates that he had been invalided out of the Royal Navy on March 11th 1916 with tuberculosis, a detail confirmed by the certificate relating to his death 6 months later which recorded that he died of phthisis pulmonalis (TB) and exhaustion.  TB was prevalent in the Navy and even in the 1920s and 1930s, despite efforts to improve conditions on ships, the death rate from TB was twice as high as for civilians.  It was difficult to diagnose until it had reached a late stage, and it is likely that Matthew's illness was only diagnosed when he was treated in hospital for the effects of gas inhalation from the accident. Matthew Bell died on 9th September 1916, aged just 20.

Principal researcher: Allan Weller of the Sampford Peverell Society, contactable via the 'Contact us' page of http://www.sampevsoc.co.uk
Sources of information

Matthew Bell is part of this family tree which can be seen by subscribers to ancestry.co.uk:
https://www.ancestry.co.uk/family-tree/tree/154479014/family

His death is described in this item from the Waifs and Strays magazine of February 1917: http://www.hiddenlives.org.uk/publications/waifs_and_strays/1917_s_25.html?

Mentioned on the December 1916 St Boniface Roll of Honour