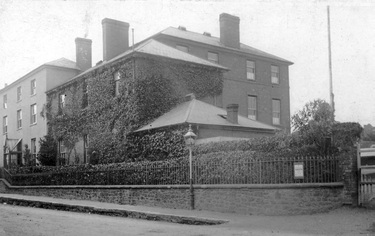 The St Boniface home for boys c 1910
Percy Charles Bradfield was born in Autumn 1891 in Wokingham and baptised on 11th October 1891.  He was the son of George Bradfield and his second wife Louisa.  George was a domestic servant – a  “gardener” in Reading in 1881 and a “groom” in Sonning in 1891 – and married his first wife Sarah Lewendon, a gardener's daughter, in 1880.  They had two daughters, Agnes and Annie – before Sarah died in 1883.  He married Sarah's younger sister Louisa in 1885, and they had six children together – Elsie, George, Percy, Florence, Ernest and Alfred.

Following the death of his father George in 1900, his mother Louisa, not in the best of health and finding it impossible to keep the family together, sent Percy and his brother George to the "Reading & Wokingham School District" School in Wargrave, Berkshire, where they are recorded on the 1901 Census as being two of 114 “pauper scholars”.  Later the same year Louisa entrusted Percy to the care of the Church of England Waifs and Strays Society, where he clearly prospered and at the age of only 16 became an assistant master when the Society opened St Boniface Home for Boys in Sampford Peverell in 1907.  In addition he became the Home's “Carpenting Instructor “ (1911 Census), Assistant Scoutmaster of the Scout Troop and Director of their Bugle Band.  In the latter capacity he appears to have been a great asset to St Boniface's: providing the boys with a morale-boosting interest and taking the band on concert tours of local towns and villages, raising much-needed funds for the Home and helping to inspire young men at Recruiting Meetings.  By all accounts they were “cordially received” wherever they went. (Exeter and Plymouth Gazette, 24.7.1915)

St Boniface residents c 1908. Percy Bradfield may be one of the young men either side of the back row. Many of these boys would have taken part in the war. Photo courtesy of Peter Higginbotham.
There is more information about St Boniface's, and there are more photos, on Peter Higginbotham's website: http://www.childrenshomes.org.uk/SampfordWS/

In February 1916 the Home Committee applied to the Military Tribunal in Tiverton for postponement of Percy Bradfield's military service, on the grounds that the then Master (Mr  Keeley), a “reserve man”  had been wounded at the Front.  The Tribunal officer, Mr New, “...thought the proper course would be for the master to come back when he had recovered, and take charge of the Home,so that the younger man Bradfield could go.” (Devon & Somerset News, 10.2.1916).  The Tribunal “thought the Committee should endeavour to get a man over military age [to take charge of the Home], and meanwhile postponed Bradfield from group 7 to group 15.” 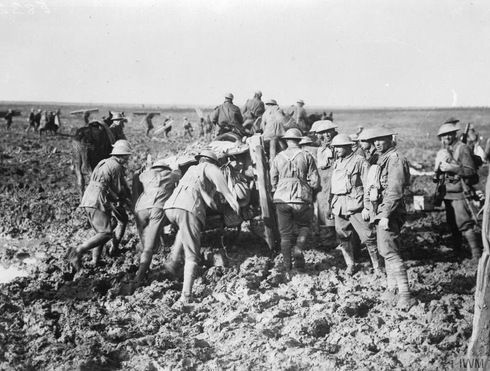 Battle of Broodseinde 4 October 1917: A battery of 1st Division Pioneers being hauled through the mud and watery shell craters near Sans Souci. Photo courtesy of the Imperial War Museum
Percy Bradfield enlisted at Exeter later in 1916, joining the 1st/5th Battalion of the Royal Warwickshire Regiment.  He saw action in France and Flanders and was killed during the third battle of Ypres on 5th October 1917.  The Western Times of 9th November 1917 reported that:

“...he was held in the greatest respect by everybody, and the news of his death was received with profound regret.  In a letter...it states that Lance-Corpl. Bradfield...was in command of a Lewis Gun team, which was held up by a Hun sniper.  In endeavouring to push on he became a target for the sniper, and was shot through the chest, dying two or three days later.  He was [ie had been] recommended for a commission, and was promoted corporal to give him further experience in commanding men.  The letter concludes: 'His life and death was an example to all.  He died a hero's death and was a credit to his country'”

The Magazine of the Waifs & Strays Society in November 1917 commented:

“Percy Bradfield was taken into the Society's family in 1901 owing to the inability of a delicate widowed mother to keep the large family together.  He bore a blameless character and eventually became assistant master at Sampford Peverell in 1907.  There, till his time came for joining the army, he served faithfully, and many friends will regret to hear that he died of wounds on October 5th.  He seems in a double sense one of the Society's devoted sons”

Following this item the Waifs and Strays magazine must have received letters about Percy Bradfield, but unfortunately were unable to publish any of them due to the paper shortage.  They just printed this in December 1917: "More than one touching testimony has been received of the personal power and singleness of heart which characterised Percy Bradfield, of whose record, first as a boy and then as a faithful officer of the Society, a short summary was given last month.  But our space will not allow even the insertion of one specially valuable appreciation by a fellow-worker".

Percy Bradfield was in the 1st/5th Royal Warwicks, a territorial battalion.  He was killed during the 3rd battle of Ypres on 5th October 1917.  There were 3 battles during 3rd Ypres, and the Royal Warwicks took part in the battles of Langemarck on 31st July till 28th August, during which 10,266 British lost their lives.  Then they took part in the battle of Polygon Wood which lasted from the 26th of September till the 3rd October, during which 1215 British were killed.  On 4th October 1917, the battle of Broodseinde started, which was recorded as a “black day for the German Army”.  On the 5th October Percy Bradfield was killed.

According to the Soldiers' Effects list on ancestry.co.uk his outstanding pay of £8 11s 6d was paid in August 1918 to his sister and legatee Elsie Louisa Simmonds, and in December 1919 she was sent a further £5 10s 0d war gratuity.

Like fellow Sampford Peverell men Walter Brown, Robert Hine, Wilfred Taudevin, and Charles Wallington, Percy Bradfield is commemorated at the Tyne Cot Memorial in Zonnebeke, Belgium, where his name is on stone 24.  The Commonwealth War Graves Commission website records that “The Tyne Cot Memorial is one of four memorials to the missing in Belgian Flanders which cover the area known as the Ypres Salient… It bears the names of almost 35,000 officers and men whose graves are not known.”

Percy Bradfield is part of this family tree which can be seen by subscribers to ancestry.co.uk:
http://trees.ancestry.co.uk/tree/79099585/family

Percy Bradfield's obituary from 'Our Waifs and Strays' magazine, the Church of England Homes publication, in November 1917, giving more information about his background, can be found here:
http://www.hiddenlives.org.uk/publications/waifs_and_strays/1917_s_152.html?

and the follow up item about testimonials to him in that magazine in December 1917 is here: http://www.hiddenlives.org.uk/publications/waifs_and_strays/1917_s_161.html?