Richard Crook was born in Loxbeare in 1882, the son of Richard Crook – a “casual labourer”, of Cruwys Morchard and his wife Anne.  He married Elizabeth Mary May in 1904 and they had 4 children: Harold, Albert, Victoria and Reginald.

On the 1911 census he was a farm worker and “Stationary Engine Driver”, probably operating an early threshing machine or similar, and as such, it is likely that he was employed as a 'casual' labourer on a number of farms, moving frequently – with his family – to 'tied' cottages in neighbouring parishes.  He was probably working for a Sampford Peverell farmer with a cottage in the village at the time of his enlistment.

After call-up he enlisted on 19th January 1917 in the Inland Water Transport division of the Royal Engineers.  His military record on the findmypast website shows his occupation on enlistment as “Stationary Engine Driver”, and his rank as “Pioneer” (aka Sapper) with the regimental number 23307, sometimes written as 233307.

The Royal Engineers Inland Water Transport division was based in Richborough on the Kent coast, near Sandwich.  Ships and barges were built there, as was the first roll-on roll-off ferry, and men were sent to France to handle canal transport. 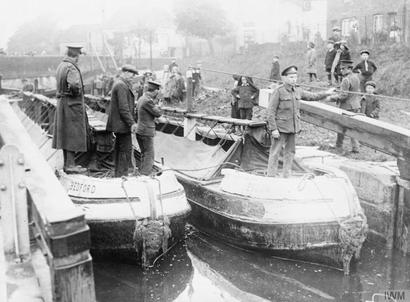 Troops of the Royal Engineers, Inland Water Transport Unit on barges passing through a lock.  Photo courtesy of the Imperial War Museum 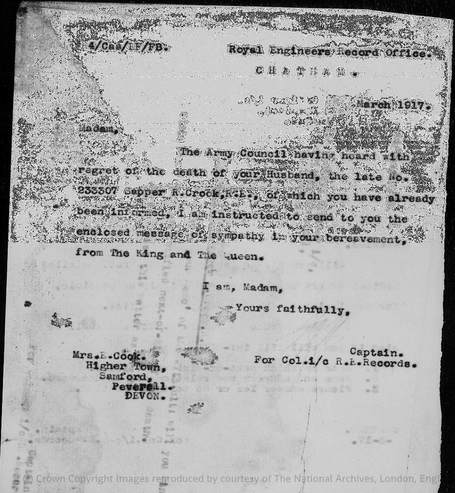 A letter from the army to Mrs Crook in Higher Town. From findmypast.co.uk, copyright National Archives.
Richard Crook’s war service was very brief indeed, as he contracted German Measles which led to pneumonia, and he died in the Military Hospital Canterbury on March 8th, 1917.  His lungs had become very blocked and his medical notes say that in addition to expectorants, brandy and hypodermic strychnine were administered to him but his breathing was “sterterous” and his pulse gradually weakened until he died at 10.10 am on 8th March.
​
The numerous documents making up his military record on the findmypast website include:

1. A detailed record of his progress in hospital – both hand-written and transcribed.
2. A hand-written letter by Elizabeth Mary Crook (widow), dated 18th February 1918, giving her address as “Uplowman Cross”.
3. A declaration by the widow (as above) dated 11th November 1919, giving her address as “19 Little Silver, Tiverton”.
4. A reference to a “Memorial Plaque and Scroll”.
5. A letter dated June 1917 from R.E. Record Office, Chatham to War Pensions Committee in Tiverton requesting confirmation that Richard Crook was father of Harold George and was supporting him prior to enlistment.  [this was required because the child was born out of wedlock – i.e.in 1904, before his parents' marriage]
6. A letter confirming the above.
7. A document authorising payment of pension of 28/9 per week wef 10th September 1917. 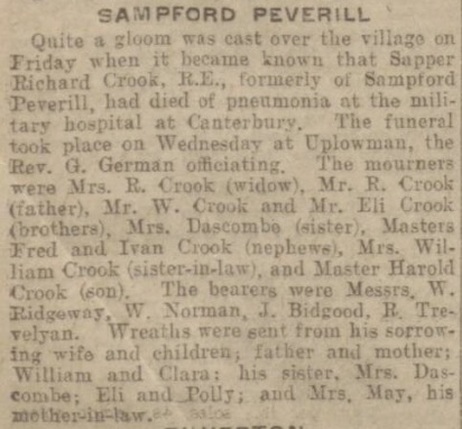 It seems his widow moved to Uplowman after his death; hence his inclusion on the War Memorial Roll of Honour in St Peter's Church Uplowman, but Richard Crook was certainly thought of as a Sampford man at the time of his death, as shown by an article in the Western Times of March 16, 1917, under the Sampford Peverell heading:

“Quite a gloom was cast over the village on Friday when it became known that Sapper Richard Crook, R.E., formerly of Sampford Peverill, had died of pneumonia at the military hospital at Canterbury.  The funeral took place on Wednesday at Uplowman, the Rev. G. German officiating.”  The article goes on to list the mourners, coffin bearers and senders of wreaths.

Elizabeth Crook seems not to have remarried and died in 1943, aged 70.


Image above reproduced with kind permission of The British Newspaper Archive (www.britishnewspaperarchive.co.uk) ’.  Image © THE BRITISH LIBRARY BOARD. ALL RIGHTS RESERVED. It can be found at this link 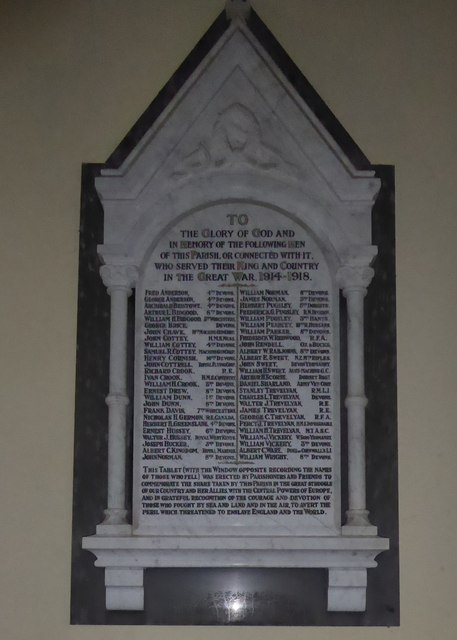 Richard Crook is part of this family tree which we have created on ancestry.co.uk and which subscribers to the site can see here:
https://www.ancestry.co.uk/family-tree/tree/153814349/family