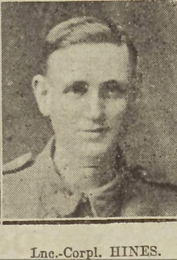 From the Western Times, Friday 26th October 1917 (it should read 'Hine'). See note (1) for source of article
Robert Thomas Hine was born in October 1896 in Culmstock, about six miles west of Sampford Peverell, the oldest of 5 children of William James Hine 1869-1940, born in Holcombe Rogus, a Railway Plate Layer (like his father, another Robert) and Alice Stone 1872-1950 from Culmstock. Late in 1900 the family moved to Moor Cottages on the eastern outskirts of Sampford Peverell, on the road to the railway station.  By this time there were 3 children: Robert, Frederick William (born 1899), and Louisa Elizabeth (born 1900).  A further two sisters (Rhoda May and Beatrice Mary) were born in 1902 and 1906 and baptised at St Johns Church in the village.

We know from the log of the village school that Robert Hine was an attendee.  When the Reverend Philip Rossiter died in 1910 he left many charitable bequests including £5 each to a number of local schoolchildren.  Amongst these were Robert and Louisa Hine, for whom £5 would have been a very large sum of money. 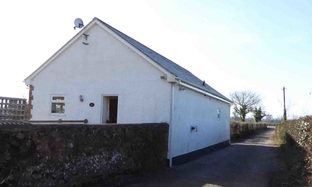 Jersey Cottage, March 2015. It was originally a pair of cottages.
By the time of the 1911 census the family had moved to Jersey Cottages, then a pair of cottages but now one cottage, in Sampford Peverell, on the road that now goes down to the station, then a railway siding. The father still worked on the railway and Robert, then aged 14, was in “Domestic Service by the Day”.  In his 'next of kin' information on the Commonwealth War Graves site, his parents’ address given in 1917 is ‘Underdown, Sampford Peverell’. 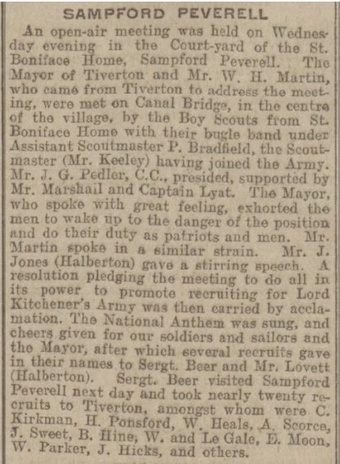 Western Times, 11 Sep 1914
This newspaper article published on 11th September 1914 describes a recruitment meeting held in the courtyard of the St Boniface home in the village, which included stirring speeches, calls to patriotism, and much cheering.  It reports that the recruiting sergeant returned the next day and took nearly twenty recruits to Tiverton including B (perhaps for 'Bob') Hine. 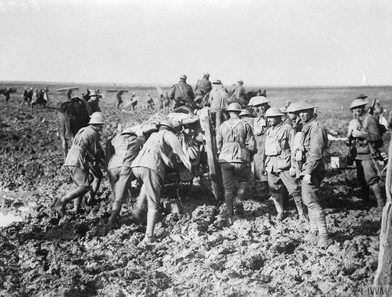 Battle of Broodseinde 4 October 1917: A battery of 1st Division Pioneers being hauled through the mud and watery shell craters near Sans Souci. Photo courtesy of the Imperial War Museum
Robert Hine joined the 8th Battalion Devonshire Regiment as a private and first saw active service in France on 25 July 1915. He was in a machine gun corps, and at some point before 31st August 1917 he was promoted to Lance Corporal. A newspaper article published on that day reported that he was “home on furlough from the trenches”.

After his leave Robert returned to France where the 8th Devonshires were part of the 20th Brigade of the 7th Division, who took part in the third battle of Ypres, also known as Passchendaele, infamous for the terrible mud and for the scale of casualties.  According to the BBC history web site (http://www.bbc.co.uk/history/worldwars/wwone/battle_passchendaele.shtml)  “The infantry attack began on 31 July. Constant shelling had churned the clay soil and smashed the drainage systems. The left wing of the attack achieved its objectives but the right wing failed completely. Within a few days, the heaviest rain for 30 years had turned the soil into a quagmire, producing thick mud that clogged up rifles and immobilised tanks. It eventually became so deep that men and horses drowned in it.

On 16 August the attack was resumed, to little effect. Stalemate reigned for another month until an improvement in the weather prompted another attack on 20 September. The Battle of Menin Road Ridge, along with the Battle of Polygon Wood on 26 September and the Battle of Broodseinde on 4 October, established British possession of the ridge east of Ypres”.  In total about five miles were gained but: “it had taken over three months, 325,000 Allied and 260,000 German casualties”.    Robert Hine was killed in action in charge of a machine gun [1] on 7th October 1917, aged 20.  A service was held in the village church in memory of Robert Hine and James Trevellyan, another casualty who died two days earlier.  “Muffled peals were rung on the bells, and the Dead March was played by the organist”.

According to another newspaper report the Hines had another son serving in Egypt.  This must have been Robert’s brother Frederick William, who was only 18 when Robert died. 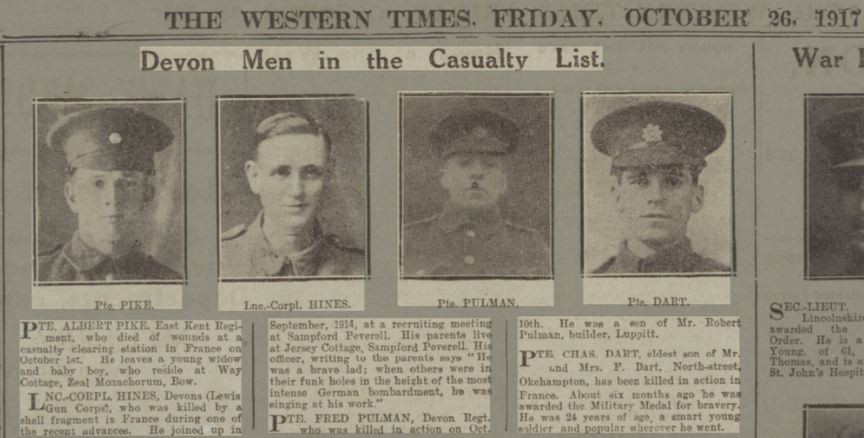 See note (1) for source of article

This newspaper article from the Western Times of 26th October 1917 records that Robert’s officer wrote this to his parents: “He was a brave lad; when others were in their funk holes in the height of the most intense German bombardment, he was singing at his work”. 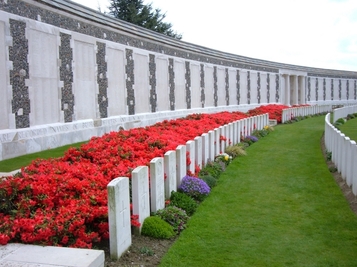 Tyne Cot Memorial, Belgium. Photo courtesy of the Commonwealth War Graves Commission.
Like fellow Sampford Peverell men Percy Bradfield, Walter Brown, Wilfred Taudevin, and Charles Wallington, Robert Hine is commemorated at the Tyne Cot Memorial in Zonnebeke, Belgium.  His name is on stone 38A. According to the Commonwealth War Graves Commission “The Tyne Cot Memorial is one of four memorials to the missing in Belgian Flanders which cover the area known as the Ypres Salient… It bears the names of almost 35,000 officers and men whose graves are not known.”

Robert Hine is part of this family tree which we have created on ancestry.co.uk and which subscribers can see here:
http://trees.ancestry.co.uk/tree/68296702/family?cfpid=34175926507

More information about Passchendaele can be found on this BBC website: http://www.bbc.co.uk/history/worldwars/wwone/battle_passchendaele.shtml