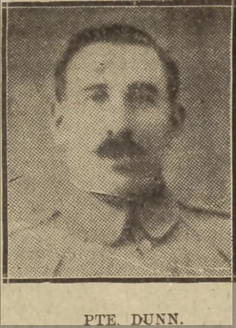 Sidney Dunn's photo in the Western Times on 24th May 1918, under the heading 'Others Who Have Laid Down Their Lives For Their Country'. See note (1) below for source of photo.
Sidney Dunn was born on 3rd January 1884, the son of Frederick John Dunn (born 9th July 1843 in Halberton, son of John and Anne) and his wife Fanny Eliza, née Gosling (baptized 25th January 1846 in Sampford Peverell, daughter of Isaac and Harriet).  Sidney was baptized in Sampford Peverell church on 22nd January 1884, and at that time his father was described as a ‘coal merchant’, but from the mid 1880s he was also the licensee of the Hare and Hounds public house in Lower Town (2018: Coronation Cottages).  Judging by a case mentioned in the local newspaper it seems Frederick was not always strict about closing hours in the pub, claiming his clock must have been wrong, by half an hour …

In the 1891 census the family, who lived in the Hare and Hounds, consisted of Frederick, Fanny, and their children: Mary, 14, Harriett, 12, Sidney, 7, and Theresa, 5, all born in Sampford Peverell.

Frederick Dunn died, aged 56, in 1900, and was buried in the churchyard on 18th October that year, when Sidney was 16 years old.  Sidney’s mother, Fanny, continued to run the pub, helped by her daughter Theresa who, aged 15, was described as a ‘licensed victualler’s assistant’ in the 1901 census.   Sidney now also had a nine-year-old sister, Annie.  Sidney himself worked as a “grocer’s assistant”. 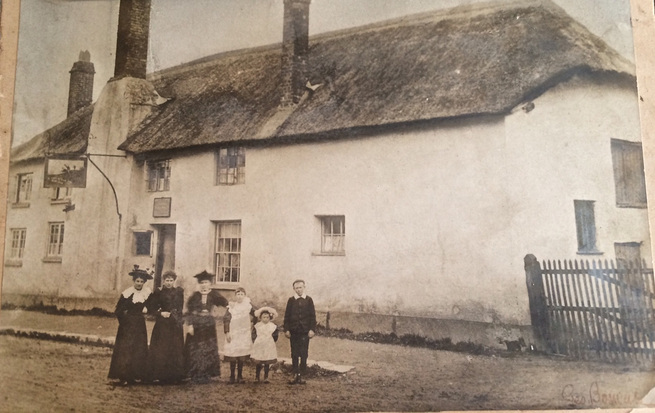 Sidney Dunn, on the right, with his sisters and (probably) his mother, outside the Hare and Hounds, c 1897. Photo kindly supplied to the British Legion by his granddaughter
In April 1906 Sidney’s younger sister Theresa married Robert Trevelyan, a quarryman, from Burlescombe, and in 1907 Sidney himself married Caroline Trevelyan, daughter of George Trevelyan, carpenter, of Always Cottage, Sampford Peverell and his wife Caroline.  Theresa’s husband Robert and Sidney’s wife Caroline were second cousins to each other and also to James Trevellyan, another local war casualty.  In 1881 Caroline’s family had been living next door to the Hare and Hounds where Sidney’s family lived, so the children of the two families would have known each other well. Caroline's nephew, Stanley Trevelyan, was another casualty in the war.

In October 1908, according to the Western Times, Sidney was fined 6s for “using bad language towards his wife”.  Nevertheless by 1911 they had two children, Frederick, 2, and Leslie, 1, and were living in Kings Cottages Lower Town, (2018: the site of 5-7 Lower Town),  in a 4-roomed house near Morrells.  Sidney was now a builder's labourer, and by this time his mother Fanny had retired and was living in another house in Lower Town with her daughter Annie, a laundress.  The Hare and Hounds had been taken over by Allan Gunn. 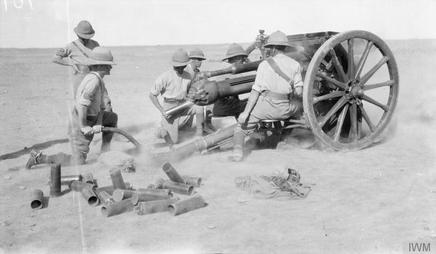 A British 18-pounder Field Gun firing from an open position in the flat desert landscape of lower Mesopotamia. Photo courtesy of the Imperial War Museum.
Sidney and Caroline went on to have another son, William, born in August 1911, a daughter Daisy, born in August 1912, and another daughter, Violet, born in July 1915.  In the parish register for Violet's christening Sidney's occupation is 'soldier', so he must have enlisted by then.  Sidney’s mother Fanny Dunn died in 1916 aged 69, and was buried in the churchyard on 13th May.

In September 1917 Sidney’s sister Annie married Rifleman Thomas Drew who was home on leave, having been wounded in France.  According to the Western Times Annie was given away by her brother-in-law, Robert Trevellyan, and her sister Therese Trevellyan was her bridesmaid.

On 7th December 1917 the Western Times reported that Caroline, now living in Higher Town, had “received intimation from her husband, Pte. Sydney Dunn, Dorsets, that he is now convalescent from his recent severe illness and has returned to India from Mesopotamia”.  Her address was then Royal Oak cottages (2018: the space next to the school).  In the early 1900s the “Charity Lands of Sampford Peverell” had money left over from an insurance claim and used it to buy “a piece of land with the two cottages thereon known as Royal Oak, containing 2.5 perches or thereabouts, situate in Higher Town”.  The charity rented out this and other properties and used the money raised to help the poor and needy of the village. 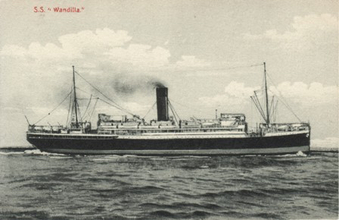 The 'Wandilla'
Sidney was in Mesopotamia (largely modern-day Iraq) because he had been transferred from the Devonshire Regiment to the 2nd Dorsetshire Regiment.  From January 1917 to April 1918 the 2nd Dorsets came under the 9th Indian Brigade, 3rd Indian Division.  This division, largely comprised of troops from India, arrived in Mesopotamia in April 1916 to fight the Turks, who were allies of Germany, and the action there continued until the end of the war.  The following comes from the Long Long Trail website:

“Like Gallipoli, conditions in Mesopotamia defy description. Extremes of temperature (120 degrees F was common); arid desert and regular flooding; flies, mosquitoes and other vermin: all led to appalling levels of sickness and death through disease. Under these incredible conditions, units fell short of officers and men, and all too often the reinforcements were half-trained and ill-equipped. Medical arrangements were quite shocking, with wounded men spending up to two weeks on boats before reaching any kind of hospital. These factors, plus of course the unexpectedly determined Turkish resistance, contributed to high casualty rates.

Sidney was suffering from malaria and having earlier been sent to India, he was now sent back to Alexandria on the ‘Wandilla’, an Australian naval ship that had been converted into a hospital ship. Alexandria was an important hospital centre during both World Wars and was much used by hospital ships and troop transports carrying the sick and wounded out of the theatres of war.
On 10th May 1918 the Western Times carried this report: “Mrs Sydney Dunn, of Higher Town, Sampford Peverell, was officially informed on Tuesday that her husband, Pte. S Dunn, Dorset Regt., had died from heart failure on April 10th while on his way home from India on sick leave.  Much sympathy is felt for the widow and five young children.  A memorial service was held in the Parish Church on Sunday, and muffled peals were rung.”

Sidney died in Egypt on 10th April 1918, and is buried in the Alexandria (Hadra) War Memorial Cemetery in Egypt.  The wording chosen for his headstone by his wife Caroline is “Thou wilt keep him in perfect peace whose mind is stayed on thee”.  According to the list of Soldiers’ Effects on ancestry.co.uk his outstanding pay was just five shillings, which was sent to his widow, Caroline, in October 1919.

A year after his death, on 11th April 1919, Caroline Dunn placed this In Memoriam article in the Western Times.

From the Western Times 11 Apr 1919. See note (2) below for source of photo.
(1) Photo of Sidney Dunn at top of page: Image reproduced with kind permission of The British Newspaper Archive (www.britishnewspaperarchive.co.uk) ’.  Image © THE BRITISH LIBRARY BOARD. ALL RIGHTS RESERVED. It can be found at this link

(2) Photo of 'In Loving Memory':  Image reproduced with kind permission of The British Newspaper Archive (www.britishnewspaperarchive.co.uk) ’.  Image © THE BRITISH LIBRARY BOARD. ALL RIGHTS RESERVED. It can be found at this link
Details from List of Casualties (under Military Records on Ancestry.co.uk, slightly corrected)

He is part of this family tree which we have created on ancestry.co.uk and which subscribers to ancestry can see here:
http://trees.ancestry.co.uk/tree/75095161/family

Information about his unit, 2nd Battalion regiment, from the Long Long Trail :http://www.longlongtrail.co.uk/?s=dorset+regiment

Information about the HMS Wandilla, a hospital ship, if you scroll down this discussion:
https://www.greatwarforum.org/topic/168069-request-assistence-hmahs-wandilla/