In the 1901 census the family was living in Lower Town, Sampford Peverell, in one of a group of eight cottages (2018: the site of 16 Court Way).  Stanley’s aunt, Caroline Trevellyan, would later marry Sidney Dunn, another WW1 casualty, who grew up in the Hare and Hounds.  Another WW1 casualty, James Trevellyan, was a second cousin of Caroline and Stanley's father, William.  William worked as a carter on a farm, and the other family members in 1901 were Stanley’s mother, Mary Ann, Edith Radford (aged 14, servant, a relation of his mother), and Stanley's younger brother George Charles, known as Charley, aged 2.  Like Stanley, Charley was born and christened in Sampford Peverell.

At the time of the 1911 census Stanley’s parents were living in “Whitnage, Sampford Peverell” with children Charley (12), Percy (10), and William (2). Percy and William were both born in Sampford Peverell and christened in Sampford Peverell parish church. Stanley, now 14, was working as a “cow boy” for George Lock, a dairyman, in Brithembottom, Cullompton. He must have moved from there to work in a quarry, as he was described as a quarryman when he enlisted in 1914.
Stanley’s service number was PLY/16549 and he served as a Private in the Royal Marine Light Infantry. His service record on findmypast.co.uk contains the following pieces of information:

Initially he was in the recruit depot in Deal from 14 Jan 1914 until 12 Sep 1914, when he was transferred to Plymouth. Stanley was in the Plymouth division from 15 Sep 14 to 11 Nov 14, his embarkation date. He then served on HMS Louvain from 17 Nov 1914 to 10 July 1917. Throughout this time his character was described as very good and his ability as satisfactory. HMS Louvain was formerly a passenger ship called the SS Dresden. Like many civilian ships the SS Dresden was taken over by the Admiralty in 1915 as an Armed Boarding Steamer, a type of warship designed for boarding an enemy vessel, and she was renamed HMS Louvain. We don’t know exactly where the ship was operating but six months after Stanley left her, on 21 Jan 1918, she was torpedoed in the Eastern Mediterranean, with the loss of nearly all on board amongst whom were many Maltese nationals, so it is likely that the ship was involved in the conflicts around Greece and Turkey when Stanley served on her. 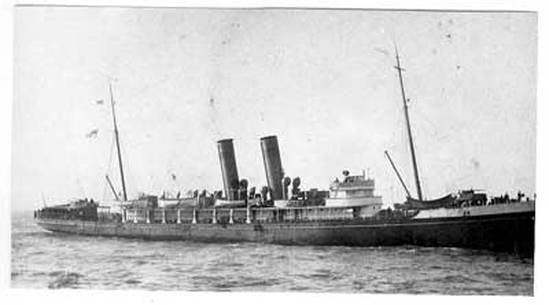 HMS Louvain
Stanley was transferred back to the Plymouth division in July 1917, probably for extra training judging by the drills on his service record, and was there from 11 Jul 1917 until 20 March 1918 when he re-embarked.  This time Stanley is described as being on "President III DAMS" (Defensively Armed Merchant Ships) from 21 March 18 to 10 August 18.  "President III" was not a ship; it was an administrative centre for the Navy, and is all that appears on the records of servicemen assigned to defend merchant ships, probably because they regularly changed ship.  They received increased pay for being with DAMS; technically they were lent to the Board of Trade and received Mercantile Marine rates of pay, which were considerably higher than Naval rates.  They also wore civilian clothes in harbour, and apparently there has been some debate as to the legality of this and of the arming of merchantmen.  They had authority to move from ship to ship as and when needed.

At the time of his death Stanley was on board the SS Tatarrax. One website says the Tatarrax was a British steam tanker built in Greenock.  In 1916 she was purchased by the Standard Transportation Company, Hong Kong.   “On August 10th, 1918, Tatarrax, on a voyage from Port Said via Alexandria to France with a cargo of spirit, was sunk by the German submarine UC-34 (Hans Schüler), off Rosetta. 61 persons were lost.” 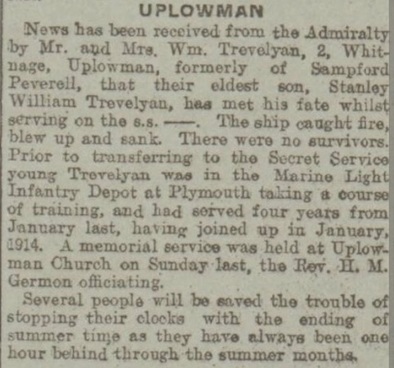 From the Western Times, 27 Sep 1918. Image © Local World Limited. Image created courtesy of THE BRITISH LIBRARY BOARD. Image reproduced with kind permission of The British Newspaper Archive
The Western Times reported his death on 27th September 1918 as follows: “News has been received from the Admiralty by Mr. and Mrs. Wm. Trevelyan, 2, Whitnage, Uplowman, formerly of Sampford Peverell, that their eldest son, Stanley William Trevelyan, has met his fate whilst serving on the s.s.---.  The ship caught fire, blew up and sank.  There were no survivors.”  It also reports that a memorial service was held at Uplowman Church.


The newspaper article can be seen on www.britishnewspaperarchive.co.uk at this link for those reading this on the internet.
Stanley is remembered on panel 29 of the Plymouth Naval Memorial.  The Commonwealth War Graves Commission website records that he was “killed by internal explosion of vessel off Alexandria 10 Aug 1918”.  Rank – Private.  Age 22”.  The Plymouth Naval Memorial is one of three memorials (the other two are in Chatham and Portsmouth) to those members of the Royal Navy who died during the war and had no known grave.  His name is also amongst those on the memorial plaque in the church at Uplowman.

The Royal Marine medal roll 1914-20 on findmypast.co.uk shows that he was awarded the 1914-15 Star, Victory, and British War medals, which were sent to his father.

Stanley’s brothers Percy and Charley also fought in WW1: Percy was in the Royal Navy, and Charley was in the Royal Field Artillery.  Both emigrated to Australia after the war: Percy in January 1921 and Charley in December 1921.  Charley had come back from the war with problems, and apparently went into the bush and lost touch with the family.  Percy’s daughter has stayed in touch and has been back to visit the area.  Stanley’s other brother, William, was too young to be involved in WW1 but he joined the RAF in WW2.  William’s son, another Stanley, who still lives in Sampford Peverell, often visited his Trevellyan grandparents when they lived at 4, Boobery, and he remembers them with great affection.  He can recall his grandmother, the mother of Stanley, Percy, and Charley, telling him that the boys joined up during WW1 for the excitement, but that, sadly, it turned out badly for all of them.

Stanley Trevelyan is part of this family tree which we have created on ancestry.co.uk and which subscribers to ancestry can see here: http://trees.ancestry.co.uk/tree/75014822/family

Service records from www.ancestry.co.uk and newspaper articles from findmypast.co.uk can be seen on this password protected page