Walter George Brown was born in March 1899 in Cruwys Morchard, Devon, the youngest of five children of Elizabeth Ellen Brown.  His mother, known as Ellen, was one of twins born in Willand in October 1858, to farmers John and Eliza Brown.   In 1882 Ellen’s twin sister Susanna married Henry Gibbons, born in 1860 in Oakford, Stoodleigh, Tiverton. He was a farmer and they had three children over the next few years. Tragically Susanna died in 1888, shortly before her thirtieth birthday. The unmarried twin sister, Elizabeth Ellen Brown, then moved in with Henry Gibbons and in January 1891 a child was born – also called Elizabeth Ellen. On the 1891 census in Butterleigh she is recorded as Ellen Brown, niece, aged 2 months and her mother is shown as a servant working for Henry. Interestingly her daughter’s birth is recorded in Tiverton as Ellen Gibbons. During the 1890s a further four children were born: Eva, William, Frederick, and Walter George, the youngest. 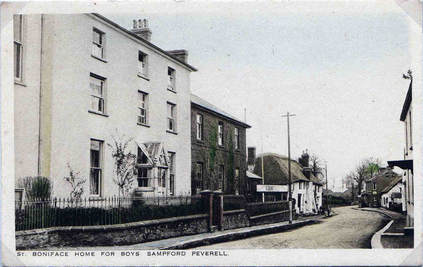 By 1901 Henry Gibbons had moved from Butterleigh, via Cruwys Morchard, to Higher Combe Farm in Cadeleigh, on the other side of the Exe Valley.  His three teenage children, Ethel, Henry and Susanna, were still living with him, as was his sister in law/partner Elizabeth Ellen Brown (described as his housekeeper) and her five children.  In the census the surnames for all these children, including Walter George, is not recorded as Brown, but as Gibbons.  We have learned from the Children’s Society records for Walter that soon after this the family split up, with Ellen and two of her boys having to move to the Tiverton Union, ie the workhouse, due to neglect by the father.  On her application form to the Waifs and Strays society Ellen reported that Henry Gibbons discovered that Ellen had left him to go out and work, so he drove the two boys, Frederick and Walter, aged just 4 and 2, to the farm where she was employed, and left them in the road. They and their mother had nowhere to live, so had to enter the Tiverton workhouse, where they stayed for nine years – most of Walter’s childhood.  On the form the boys were described as “good characters, and are promising lads”, and it reported that Ellen “is anxious to earn enough to make a little home for the boys.”  Walter and his brother Frederick were admitted to St Boniface Home in Sampford Peverell in August 1910.
The 1911 census shows that Walter’s mother, Ellen, was working in Cullompton as a servant, on a farm run by a younger single woman. Frederick had recently turned 14 so had left St Boniface Home, but Walter was still there.  In July 1912 he became an apprentice weaver at the Devon Arts and Crafts Guild, but he was readmitted to St Boniface Home in March 1914.  He left again later that year to work on a farm in Devon where his eldest sister worked as a housekeeper.  His brother Frederick later joined the 4th Devonshire regiment, probably in 1915 when he reached 18, and is recorded on the 1916 St Boniface Roll of Honour.  Frederick survived the war and by 1921 had moved to Fulham, London.

On 9th May 1915, aged 16, Walter decided to increase his age by 3 years to 19 years 2 months and enlisted at Exeter in the 3rd Battalion, H Company of the Devonshire Regiment, service number 17833, giving his occupation as a labourer and his address as Loxbeare, where his mother was living. His service record tells us he was 5’ 5½”, with hazel eyes and dark brown hair.  After nearly a year of training his true age was revealed and he was discharged from the army on 3 Apr 1916 at Devonport, aged 17 years 1 month, “in consequence of having made a mis-statement as to age on enlistment.”  However his character was described as “sober, honest and industrious”.

He left Devon and moved to Gletsdale, Monmouth with his older sister Elizabeth Ellen.  On 19th April 1917 in Cardiff he re-enlisted in the army, declaring his previous 11 months under-age service with the 3rd Devons.  This time he joined the 72nd training reserve for the 52nd Battalion of the Manchester Regiment, service number 38917. He correctly gave his age as 18 years and 1 month and described his occupation as motor driver. He seems to have grown three inches – his height was now 5’ 8½“! 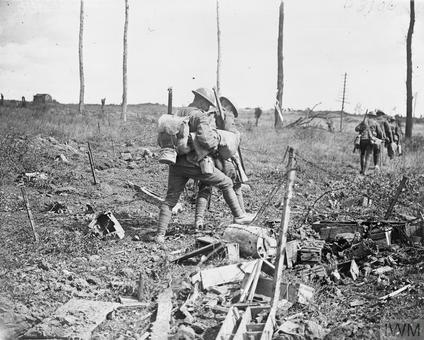 Soldiers in the 'Advance in Flanders' on 1st Sept 1918. Photo courtesy of the Imperial War Museum
On 1st Aug 1917 he was transferred to the 74th reserve then on 31st August transferred again to 229th Infantry Battalion with the Manchester Regiment as service number 63621. Four months later, just after Christmas 1917, he was promoted to acting Lance Corporal. On 1st Apr 1918 he was transferred to the British Expeditionary Force as a private. He left Folkestone the next day and sailed to Boulogne in France. He was then transported to Étaples and on 5th April joined the 20th Battalion of the Durham Light Infantry with yet another regimental number: 82203.  There is an interesting disciplinary note in his military record: on 8th July 1918 he was found guilty of not complying with an order and being “deficient of socks”! He was confined to barracks for five days and then immediately posted to the Durham Light Infantry Battle Rallying Station on 13 July 1918.  His battalion became part of the 124th Brigade of the 41st Division, which took part in the ‘Advance in Flanders’ from 18th August to 6th September 1918, recapturing ground lost in April 1918. 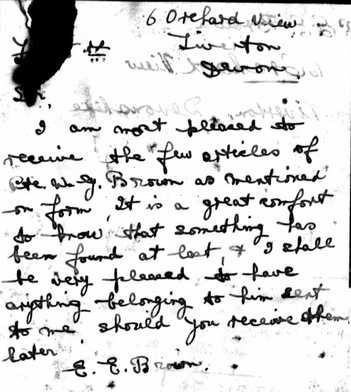 On 4th September 1918, just two months before the end of the war, and at the age of 20, Walter was killed in action. He is remembered on the Tyne Cot Memorial, near Ypres in Belgium – a memorial to 35,000 UK and New Zealand men who lost their lives in Flanders from August 1917 to November 1918 and have no known grave.  At the end of January 1919 Walter's few personal effects were found and sent back to his sister, Elizabeth Ellen, in Orchard View, Tiverton, where she lived with her sister Eva.  These effects were two memo books, a wallet and a photo.  Elizabeth sent a touching letter of thanks for the receipt of these few mementos.  Their mother, Ellen, died later in 1919. 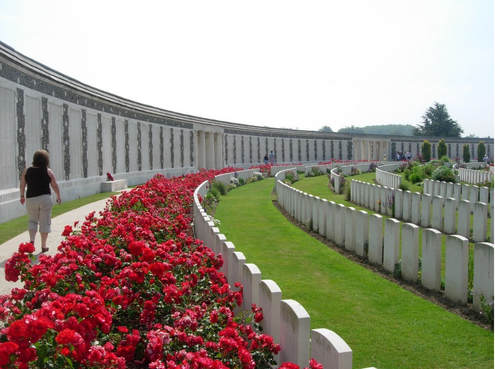 Walter Brown is part of this family tree which we have created on ancestry.co.uk and which subscribers to ancestry can see here:https://www.ancestry.co.uk/family-tree/tree/119246233/family

Service records from www.Ancestry.co.uk and newspaper articles from findmypast.co.uk can be seen on Walter Brown restricted data