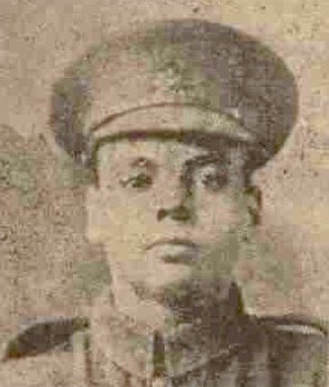 Photo of Walter Gale from the Western Times on 29 Sep 1916. See note (3) below for the source.
Walter John Gale was born in Bampton, Devon in the first quarter of 1894, and was baptized there on 4th March, the son of George Robert Gale, a “general labourer” and his wife Blanche (née Banbury) both born in Bampton.

In the 1901 census the family was living in Lower Town, Sampford Peverell, in one of a group of eight cottages (2018: the site of 16 Court Way).  The family had probably not been there long as Lewis, 9, and Beatrice, 2, had been born in Bampton, and Florence, 1 month old, was born in Huntsham.  Baby Florence was buried in Sampford Peverell on 20th September 1901 aged just 5 months. We know from the log of the village school that Walter Gale was an attendee at the school.

In the 1911 Census Walter is listed (aged 17) as a “general labourer” for a builder, and was living with his parents, two brothers (Lewis, 19, a blacksmith, and William, 7) and two sisters (Beatrice, 12, and Hilda Mary, aged 1).  They lived in a four-roomed house in Lower Town, Sampford Peverell.  We know from the log of the village school that Walter Gale was an attendee at the school, but his parents were summoned by the County Education Committee a couple of times for not sending William to school often enough.  In 1912 the Gales were fined 2s 6d because William only made 96 out of a possible 112 attendances.  Mrs. Gale said he was often ill, but had no medical certificate.  In 1913 they recorded that “Mrs. Gale persisted in keeping her son home from school once a week”, and he only attended 101 out of 114 times.  Mrs. Gale said he suffered from an abscess in the ear, and she was told to procure a medical certificate.  There are no further reports of this nature in the papers so hopefully things were settled amicably. 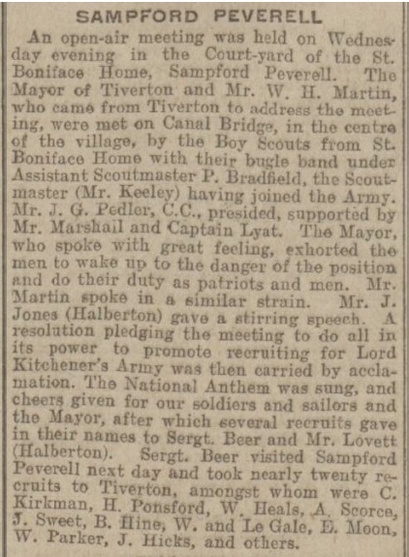 Western Times, 11 Sep 1914. See note (2) below for source.
Immediately before the war Walter Gale was working for the GWR as a canal man in the Engineering Department, based at Burlescombe.

This newspaper article published on 11th September 1914 describes a recruitment meeting held in the courtyard of the St Boniface home in the village, and reports that the recruiting sergeant returned the next day and took nearly twenty recruits to Tiverton, including Walter and Lewis Gale. 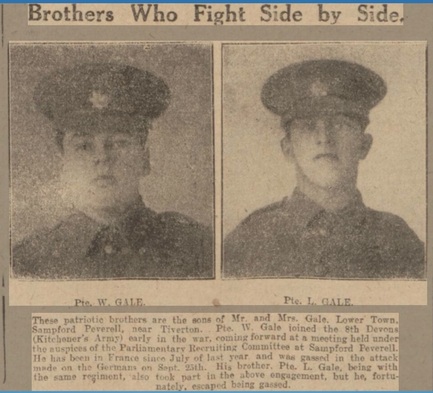 Article from the Western Times of 21 Jan 1916. See note (1) below for the source.
Like many of the men from this area Walter and Lewis Gale joined the 8th Devonshire Regiment.  They were both sent to France on 25th July 1915.  The 8th Devonshires were part of 20th Brigade, 7th Division.

A newspaper article from 21st Jan 1916 has a report on Walter and Lewis, whose parents were still living in Lower Town.  It records that Walter “has been in France since July of last year and was gassed in the attack made on the Germans on Sept 25th.  His brother Pte L Gale, being with the same regiment, also took part in the above engagement, but he, fortunately, escaped being gassed.”

25th September 2015 was the first day of the Battle of Loos, when the British used poisonous gas for the first time, and during which the British suffered badly from this cloud gas, which did not move towards the Germans as expected due to the lack of wind.  An account on the Long Long Trail website reads:

“The right-hand 7th Division found that the gas cloud generally moved well in this sector, but local wind variations meant that not all cylinders were turned on here. Many men struggled to breathe in their gas helmets as they advanced into the cloud and removed them, consequently suffering from gas themselves. Heavy losses were incurred by the lead units of 20th Brigade in No Man's Land from German shelling, which had been opened up to try to dispel the gas and smoke cloud. The 8/Devonshire suffered heavy machine-gun casualties, the wire in front of their sector having been only partially cleared.” 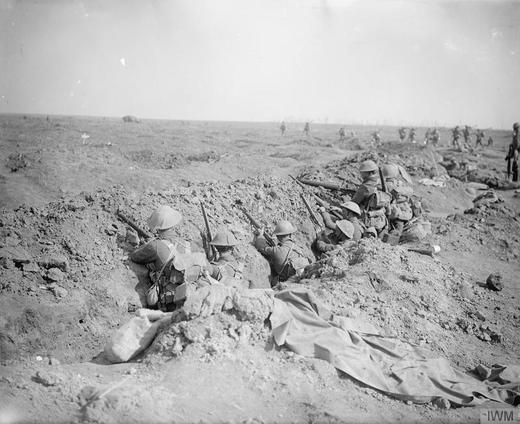 Battle of Guillemont 3-6 September 1916. British infantry waiting their turn to advance. A tank moving in distance. Photo courtesy of the Imperial War Museum.
However Walter survived the gas and either remained in, or returned to, France.  In 1916 the 7th Division was involved in the battles of Albert, Bazentin, Delville Wood, and Guillemont (3-6 Sep), all battles of the Somme.  Walter Gale was killed in action on 4th September 1916, during this last battle, aged 22, and is remembered at the Thiepval Memorial in France.

There is more information about the Thiepval memorial and the Somme on cwgc.org as follows:
“On 1 July 1916, supported by a French attack to the south, thirteen divisions of Commonwealth forces launched an offensive on a line from north of Gommecourt to Maricourt. Despite a preliminary bombardment lasting seven days, the German defences were barely touched and the attack met unexpectedly fierce resistance. Losses were catastrophic and with only minimal advances on the southern flank, the initial attack was a failure. In the following weeks, huge resources of manpower and equipment were deployed in an attempt to exploit the modest successes of the first day. However, the German Army resisted tenaciously and repeated attacks and counter attacks meant a major battle for every village, copse and farmhouse gained. At the end of September, Thiepval was finally captured.  The Thiepval Memorial, the Memorial to the Missing of the Somme, bears the names of more than 72,000 officers and men of the United Kingdom and South African forces who died in the Somme sector before 20 March 1918 and have no known grave. Over 90% of those commemorated died between July and November 1916.” 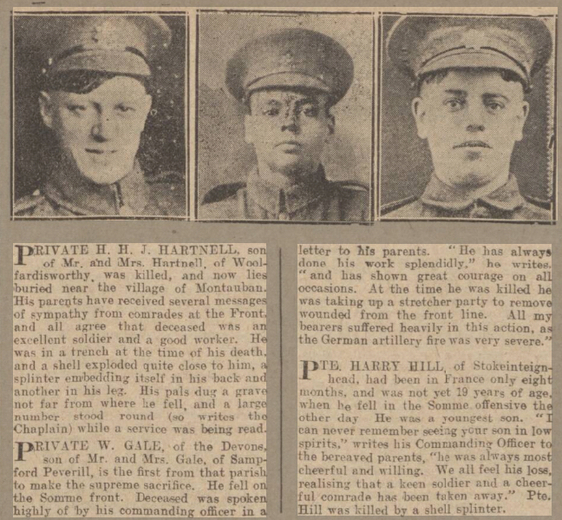 Article from the Western Times of 29 Sep 1916. See note (3) below for source.
Walter was the first man from a Sampford Peverell family to die in the war.  A newspaper report of his death, published on 22nd September 1916, recorded that 'Quite a gloom was cast over the village when news came of the death in action, on the Somme front, of Pte. W. Gale, of the Devons, son of Mr and Mrs G Gale of Sampford Peverell.  Deceased joined up at the beginning of the war, and had been in France about 18 months.  He is the first from Sampford Peverill to make the supreme sacrifice.  Deceased was spoken highly of in a letter from his commanding officer to the parents:  “He has always done his work splendidly,” he writes “and has shown great courage on all occasions.  At the time he was killed he was taking up a stretcher party to remove wounded from the front line.  All my bearers suffered heavily at this action, as the German artillery fire was very severe."'

By the time the information about him was put together after the war, his father must have died and his mother had moved to Uffculme, as he is described as “the son of Blanche Gale, of Selgar’s cottage, Uffculme, and the late George Robert Gale”.   Walter Gale is remembered on the war memorial plaque in Sampford Peverell parish church.  His brother Lewis survived the war.  GWR employees who died in WW1, including Walter Gale, are commemorated on plaques at major GWR stations such as Exeter St David's.
(1) Article from the Western Times 21 Jan 1916:  Image reproduced with kind permission of The British Newspaper Archive (www.britishnewspaperarchive.co.uk) ’.  Image © THE BRITISH LIBRARY BOARD. ALL RIGHTS RESERVED. It can be found at this link

(3) Article from the Western Times 29 Sep 1916:  Image reproduced with kind permission of The British Newspaper Archive (www.britishnewspaperarchive.co.uk) ’.  Image © THE BRITISH LIBRARY BOARD. ALL RIGHTS RESERVED. It can be found at this link
Details from List of Casualties (under Military Records on Ancestry.co.uk, slightly corrected)

Walter Gale is part of this family tree which we have created on ancestry.co.uk and which subscribers to ancestry can see here:
http://trees.ancestry.co.uk/tree/76011902/family

Information about the Devonshire Regiment from Long Long Trail: http://www.longlongtrail.co.uk/?s=devonshire+regiment