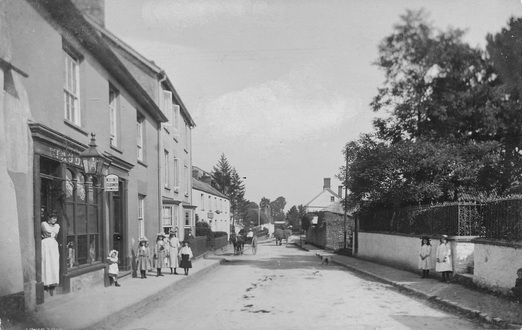 Taudevin's shop on the left, in Challis, Lower Town, in the early 1900s. The lady in the doorway may be his mother or sister.
Wilfred Taudevin was born and brought up in Sampford Peverell.  He was the sixth of the nine children of Frederic William and Caroline Taudevin (née Lanyon, from St Goran, Cornwall) of Sampford Peverell.   Wilfred’s father Frederic Taudevin came from St Peter Port in Guernsey, and moved to Sampford Peverell some time between 1871 (when he was still in Guernsey), and 1873 when his oldest son was born in Sampford Peverell.  Around this time he took over the lease of the house and shop in Challis, Lower Town, which had previously been run by Joseph Jennings, and he bought the house and shop when they came up for sale in 1884.  “Taudevin’s” shop was the main shop in the village and sold groceries and haberdashery. Frederic Taudevin was a well-respected member of the community.  As well as being a shopkeeper he was a member of the Parish Council for many years, a supporter of Liberal ideas, an active Nonconformist, and a Wesleyan preacher.

Wilfred was born in March 1881 (he was one month old at the time of the 1881 census).  There are no christening records for the Taudevins because they attended the Methodist chapel, not the parish church.  The rest of the family in 1881, as well as Wilfred and his parents, were: Frederic (7), Caroline (6), Sidney (4), Ethel (3) and Jessy (1). Other lodgers in the house were William H Shapland, a grocer’s apprentice, and Sarah Whiton, a nurse.
By 1891 Wilfred had three more siblings: Ernest, Percy and Julia.  An aunt, Grace Williams, 73, born in St Goran Cornwall, was also staying with them.  At some point in the late 1890s Wilfred and two of his brothers moved to Wales.  In the 1901 census Wilfred, now a 20-year-old grocery assistant, was living in Caerleon Road, Newport, Monmouthshire, along with his younger brothers Ernest and Percy who were outfitters.  They lodged with Charles Ambrose, a railway signal inspector born in Basingstoke, his wife Caroline and their daughter Rose Ethel, born in Reading, an 18-year-old dressmaker (who would later marry Wilfred).

Sadly Wilfred’s brother Sidney died in this area, probably in Sampford Peverell, in April 1903, aged 27.  Two years later, in 1905, Wilfred’s oldest sister, Caroline, died here too, aged 31, and Wilfred’s father, Frederic, died suddenly in 1909.  For a while his widow Caroline ran the shop; later it was managed by Wilfred’s oldest remaining brother and sister, Frederic and Ethel, though their mother continued to live in the village until her death in 1925.

In 1911 Wilfred, now 30 and a grocery manager, was boarding at 8, Eastfield Road, Andover, Hants.  Later that year, on 18th September 1911, he married Rose Ethel Ambrose in Newport Monmouthshire.    They were married in the parish church of St Matthew, Newport, and the witnesses included Wilfred’s younger brother Ernest and younger sister Julia.

The run of bad luck, or ill health, in the family continued and Wilfred’s brother Percy died in March 1913 in Farnham, Surrey, aged 28. 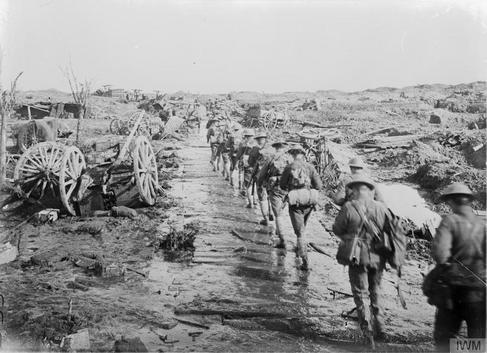 Assault on Passchendaele 12 October - 6 November: A line of infantry seen from the rear marching to a forward area along a muddy corduroy track strewn with debris at Westhoek. Photo courtesy of the Imperial War Museum.
As a married man Wilfred would initially have been exempt from conscription when it was introduced in January 1916, but in May 1916 the act was extended to include married men, and Wilfred was probably called up soon afterwards.

He joined the Hampshire Regiment (service number 243118), but was then transferred to the 6th Battalion of the Duke of Cornwall’s Light Infantry (service number 260187).  They came under 43rd Brigade in the 14th Light Division, and Wilfred served with them in France and Flanders.  The 14th Light Division were involved in the battles of Ypres, including the battle of the Menin Road from 20-25 Sep 1917, and the first battle of Passchendale, on 12th October 1917. 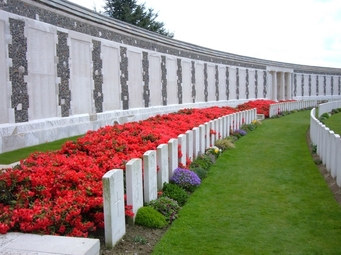 The Tyne Cot Memorial Cemetery. Photo courtesy of the Commonwealth War Graves Commission.
Wilfred Taudevin was killed in action on 18th October 1917, aged 36, leaving his widow, Rose.  They did not have any children.  According to the Soldiers’ Effects list on ancestry.co.uk his outstanding pay of £1 was sent to his widow, Rose.  Probate of his will shows he left £221 8s 4d to Rose and her father Charles Ambrose.

A Sampford Peverell news item reported that his widowed mother had “another son serving in India”.  His oldest brother, Frederic, was running the shop, so if correct this must have been Ernest, who survived the war, but it may have been a mistake.

According to another newspaper report of Wilfred’s death:

​“Private Wilfred Lawson Taudevin, of Sampford Peverell, killed in action, was formerly employed at Andover as grocery manager, was 26 (sic) years of age, and leaves a widow but no children.  A bursting shell killed him instantly, and his officer writes: 'He died as he had lived out here, working hard and doing his duty conscientiously, like the true soldier I had always found him to be.'”

Like fellow Sampford Peverell men Percy Bradfield, Walter Brown, Robert Hine, and Charles Wallington, Wilfred Taudevin is commemorated (as W.L. Tau-de-vin) at the Tyne Cot Memorial in Zonnebeke, Belgium.  His name is on stone 82A.  According to the Commonwealth War Graves Commission website “The Tyne Cot Memorial is one of four memorials to the missing in Belgian Flanders which cover the area known as the Ypres Salient… It bears the names of almost 35,000 officers and men whose graves are not known.”
Details from List of Casualties (under Military Records on Ancestry.co.uk, slightly corrected)

Wilfred Taudevin is part of this family tree which we have created on ancestry.co.uk and which ancestry subscribers can see here:
http://trees.ancestry.co.uk/tree/76123536/family

Information about the Duke of Cornwall's Light Infantry from The Long Long Trail: http://www.longlongtrail.co.uk/army/regiments-and-corps/the-british-infantry-regiments-of-1914-1918/duke-of-cornwalls-light-infantry/