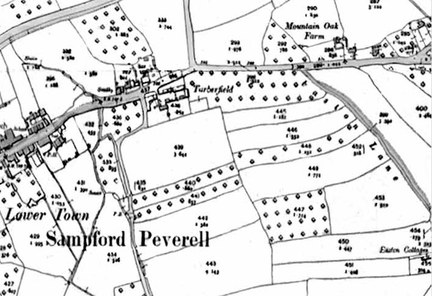 Part of the 1904 map. Easton cottage is bottom right. The full map can be found on www.sampevsoc.co.uk
Arthur Henry Scorse was the third child of Alice Scorse, who was born in Sampford Peverell in 1877 - the daughter of Charles Scorse, a railway worker, and Elizabeth, née Trevellyan.  In the 1881 and 1891 censuses they lived in Tiddly Wink cottage in Whitnage Road.

In 1891 Alice, then 14, was a domestic servant at Landside Farm.  When she was 16, and single, she had a daughter, Louisa Scorse, born on 28th March 1894 and christened in Sampford Peverell parish church in May that year.  Two years later, and still single, she gave birth to Bertie Scorse on 1st July 1896.  He was born in Tiverton Workhouse, where Alice was living at the time, but he was also christened in Sampford Peverell parish church in August 1896.  After another two years, on 29th March 1898, Alice gave birth to Arthur Henry Scorse, again in Tiverton Workhouse where she was still (or again) living.  Arthur was christened on 22nd December 1899 at St Peter’s church, Tiverton, and his abode was given as the “Workhouse”.  Several other workhouse children were christened on the same day

By 1901 Alice was working as a domestic servant again, this time at Bishops Farm, Stawley in Somerset.  Arthur Scorse, 3, and his sister Louisa, 7, were now living with their grandparents, Charles and Elizabeth Scorse, at Easton Cottage, Sampford Peverell.  This cottage was demolished long ago, but it used to be down the lane or farm track which runs south-east opposite the house called ‘Little Orchard’ in Lower Town.  Meanwhile Arthur’s brother Bertie, aged 4, was still living at Tiverton Workhouse and he seems to have stayed there until he was a teenager.

Towards the end of 1903 Alice married Charles Tucker and she had three children with him: Elsie, Ernest and Francis.  Charles Tucker died in 1908, and the following year Alice married Francis Brice.  In the 1911 census Alice and Francis Brice were living at Lands Mill, Halberton, with her children Arthur Scorse, then 13, the three Tucker children, and an 8 month old baby, Gladys Brice.  Arthur’s older sister Louisa Scorse was a general servant at Houndsmoor, Uplowman, and his brother Bertie was still in Tiverton workhouse. 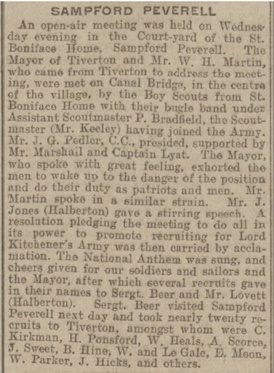 Western Times, 11 Sep 1914. See note (1) for source.
In September 1914 a recruiting rally was held in Sampford Peverell, resulting in about twenty men joining the army, including Arthur Scorse who was just 16.  This article describes the meeting, which included stirring speeches, calls to patriotism, and much cheering.  It reports that the recruiting sergeant returned the next day and took nearly twenty recruits to Tiverton, giving an idea of the mood in the village at the time.  Arthur enlisted at Exeter and served first with the Devonshire Regiment (No. 18232) and later with the 2nd Battalion, Dorset Regiment (No. 14256), which led to his being sent to Mesopotamia, like another Sampford Peverell casualty, Sidney Dunn. 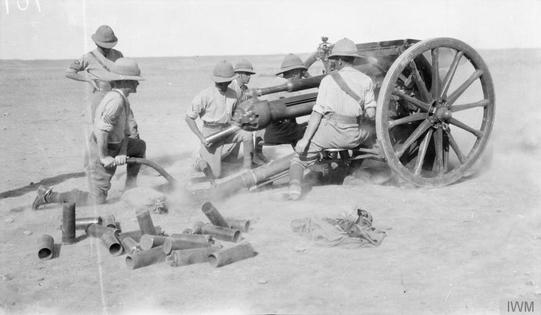 A British 18-pounder Field Gun firing from an open position in the flat desert landscape of lower Mesopotamia. Photo courtesy of the Imperial War Museum.
From January 1917 to April 1918 the 2nd Dorsets came under the 9th Indian Brigade, 3rd Indian Division.  This division, largely comprised of troops from India, arrived in Mesopotamia in April 1916 to fight the Turks, who were allies of Germany, and the action there continued until the end of the war.  The following comes from 1914-1918.net

“Like Gallipoli, conditions in Mesopotamia defy description. Extremes of temperature (120 degrees F was common); arid desert and regular flooding; flies, mosquitoes and other vermin: all led to appalling levels of sickness and death through disease. Under these incredible conditions, units fell short of officers and men, and all too often the reinforcements were half-trained and ill-equipped. Medical arrangements were quite shocking, with wounded men spending up to two weeks on boats before reaching any kind of hospital. These factors, plus of course the unexpectedly determined Turkish resistance, contributed to high casualty rates.
11012 killed, 3985 died of wounds, 12678 died of sickness, 13492 missing and prisoners (9000 at Kut), 51836 wounded.
Data from "Statistics of the Military Effort of the British Empire" (London: HMSO, 1920).”

On 11th March 1917 the British and allied troops captured Baghdad and the Berlin-Baghdad railway, which was a significant achievement, but the conflict continued.  Arthur Scorse was killed in action in Mesopotamia on 25th March 1917, a few weeks before his 19th birthday.  His brother Bertie was also in the Army and he too was killed in action in the Middle East later that year.  According to the Army Register of Soldiers’ Effects, 1901-1929 (on ancestry.co.uk), in April 1918 Arthur’s remaining pay, £9 13s 3d, was paid to his mother, Alice Brice, and a further £8 war gratuity was paid to her in 1920. 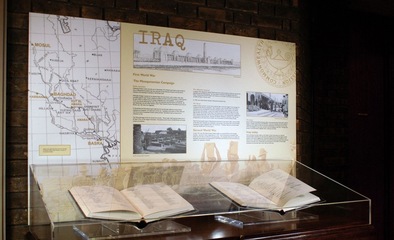 The Mesopotamia Roll of Honour in the CWGC headquarters. Photo courtesy of www.cwgc.org
Arthur Scorse is remembered on the Basra Memorial.  The Commonwealth War Graves Commission describes this memorial as commemorating more than 40,500 members of the Commonwealth forces who died in the operations in Mesopotamia from the autumn of 1914 to the end of August 1921 and whose graves are not known.  It used to be on the main quay of the naval dockyard at Maqul, about 8 kilometres north of Basra, but in 1997 it was moved to a site 32 kilometres along the road to Nasiriyah, in the middle of what was a battleground in the first Gulf War.  As it is not possible for the Commonwealth Graves Commision to maintain this memorial, they have created a two-volume Roll of Honour listing all casualties buried and commemorated in Iraq.  These volumes are on display at the Commission’s Head Office in Maidenhead.

(1) Article from the Western Times 11 Sep 1914:  Image reproduced with kind permission of The British Newspaper Archive (www.britishnewspaperarchive.co.uk) ’.  Image © THE BRITISH LIBRARY BOARD. ALL RIGHTS RESERVED. It can be found at www.britishnewspaperarchive.co.uk - for those reading this on the internet: link to page
Details from List of Casualties (under Military Records on Ancestry.co.uk, slightly corrected)

Arthur Scorse is part of this family tree which we have created on ancestry.co.uk and which ancestry subscribers can see here:
http://trees.ancestry.co.uk/tree/75095332/family

Information about the Regiment from The Long Long Trail: http://www.longlongtrail.co.uk/?s=dorset+regiment