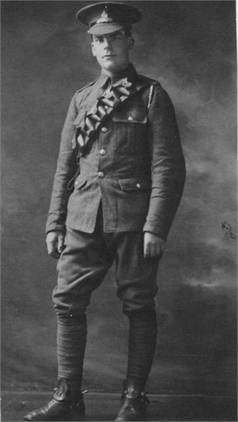 Frank G Ensor, photo courtesy of the family tree on ancestry.co.uk mentioned in the text below
Frank Gordon Ensor was the son of William Ensor and his wife Anna Maria, known as Annie.  Annie was born Anna Maria Hook and was baptised at St Anne's Siston, Gloucestershire in 1857. She married Edmund Denning, a widower with two sons, Edmund and Gilbert, at Barton Regis in 1880.  In the 1881 census they were all living in Kingswood Road, Bitton, (between Bath and Bristol). The Dennings had five more children together between 1882 and 1889: Mary (Pollie), Alice (later 'Annie'), Christopher, Stanley and Wilfred.  Edmund Denning died, at the age of 38, in 1889 - the same year that Wilfred was born.

The 1891 census shows that Anna Maria, now widowed and calling herself 'Annie', was living in Kingswood and working as a 'Boot Machinist'  to support her large family - taking to the same trade as her late husband. Her step-son Gilbert, now 15, was also working as a shoemaker, and they had two teenaged lodgers, also shoemakers, helping to pay the rent. Nearly all their neighbours were also working in the shoe trade.  Annie Denning then married William Ensor in the second quarter of 1894 in Keynsham, Somerset, and Frank Gordon Ensor was born there towards the end of 1895.  By the time of the 1901 census William and Annie had another son, Roydon, born in Q2 1899, but William was not listed in the census. Annie was living in Bristol, described as 'married', with no occupation listed, and with seven children living with her. Four of the older Denning children were working as chocolate packers or chocolate makers. Frank and Roydon Ensor were aged 5 and 2 respectively. 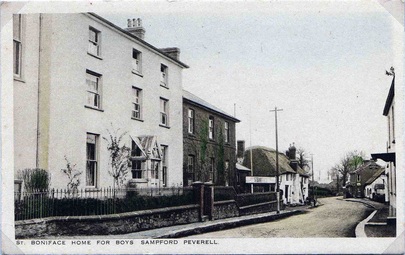 St Boniface's Home for Waifs and Strays, Lower Town, Sampford Peverell
The Children’s Society  http://www.hiddenlives.org.uk  who hold the records of the former Waifs and Strays Society, kindly passed this information on to us about what happened next:

“Frank’s mother had been left a widow since 1902. She had been in bad health for some years and almost completely dependent on what her elder son and daughter were able to earn. There were no relations able to help Mrs Ensor and as a result of this, an application was made for Frank to be looked after by the Waifs and Strays Society.”

St Boniface residents c 1908. Frank Ensor may well be one of the boys in this photo, many of whom would have taken part in the war. Photo courtesy of Peter Higginbotham. There is more information about St Boniface's, and there are more photos, on Peter Higginbotham's website: http://www.childrenshomes.org.uk/SampfordWS/
The Children's Society also told us that Frank initially went to the Bersted Home for Boys in Bognor, but when it closed in 1907 he was transferred (as was Matthew Bell, another casualty) to St Boniface’s home for waifs and strays in Sampford Peverell.  He was there from 21 Aug 1907 until 19 Nov 1909 (boys left when they reached the age of 14).

Frank must have returned to his family because in the 1911 census his mother Annie was living in Redfields, Bristol with some of her children: Annie Denning (now 27 and working as a 'Packer' for a Chocolate Manufacturer); Christopher Denning (25, a Labourer at an “Oil & Color Works”); Frank Ensor (aged 15 and a plumber's labourer) and Roydon (11 and still at school). 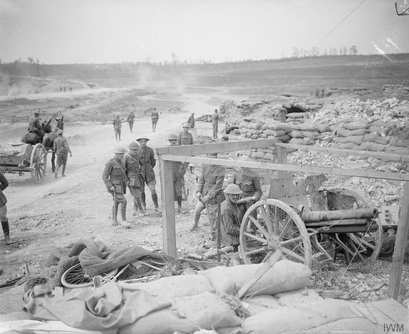 Royal Field Artillery officers firing a captured German field gun at the German lines. South edge of Mametz Wood, August 1916. Photo courtesy of the Imperial War Museum
Frank probably enlisted in 1915 because we know from his medal record that he was in France from 14th July that year, as a Bombardier with the Royal Field Artillery.  He was later promoted to Corporal, still with the RFA.  Frank served with B Battery, 80th Brigade, which became part of the 17th Ammunition Division.  In July to August 1916 they were involved in a number of engagements including the battles of Albert and Delville Wood, which were part of the Battles of the Somme.  These battles included the taking of Mametz Wood followed by successive attacks and counter attacks around Delville Wood and Pozieres.  Frank was wounded in one of these battles and died of his wounds.


According to a family tree on ancestry.co.uk:
http://trees.ancestry.co.uk/tree/61000046/person/42267391673?ssrc=&ml_rpos=2
“Frank was mortally wounded in France.  His mother Anna Maria crossed the Channel to see him.  She went with Polly (family memory from Anna’s step granddaughter Louie).”  Polly was Annie’s oldest daughter. Frank was taken to the 13th Station Hospital Boulogne.  Boulogne was one of the two main hospital areas throughout the war.  He died on 25th Aug 1916, aged 21, and he is buried in Boulogne Eastern Cemetery in France.  According to the list of Soldiers’ Effects on ancestry.cu.uk his outstanding pay of £9 9s 2d was sent to his mother and sole legatee, Anna Maria, in January 1917, and in 1919 she was sent his £10 war gratuity.

The Waifs and Strays Society kept a Roll of Honour during the war listing all former boys who were in the services, putting the name of those who died in bold type, including Frank Ensor.

Information about his unit from the Long Long Trail :http://www.longlongtrail.co.uk/?s=rfa+units

Mentioned on the December 1916 St Boniface Roll of Honour