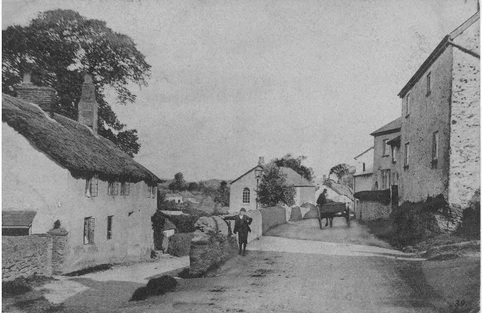 Higher Town in the early 1900s
Thomas Cornish was born early in 1897 in Hillfarrance, Somerset, the son of Eli Cornish (1860-1940) and his wife Elizabeth Maria, née Rossiter (1871-1938).  In the 1901 census his father Eli was a “platelayer and railway worker”, (a platelayer was someone who repaired and replaced railway track), living in Hillfarrance with his wife and children: Albert James (9), Edith Mary (7), William Henry (5) and Thomas (4).

To judge by the birth dates of the later children, they must have moved to Devon in the next three years and by 1911 the family was living in Higher Town, Sampford Peverell (2018: in part of 30 Higher Town), where they spent the rest of their lives (both parents were buried in the village).  The father, Eli, was then a canal labourer; Albert was a shoemaker’s apprentice, and William was a labourer for a builder.  Two more sons had been born and were baptized in Sampford Peverell: Herbert Charles, born 30th October 1903, and Wilfred Eli, born 20th June 1906. Another son, Clifford, was born in 1914.

In the 1911 census Thomas Cornish was listed as a “servant (boots, cleaning, garden, etc.)”, living at Ivy Grove, Sampford Peverell (2018:  2 and 2a Chains Road), working for William Henry Norrish, the butter manufacturer.  His sister Edith was a live-in servant in Willand for Thomas Mills, a butter factory manager, and his family.  A later newspaper report said that he "before joining up had worked at Messrs. Norrish and Son's Creamery, Sampford Peverill (sic), from the time he left school." 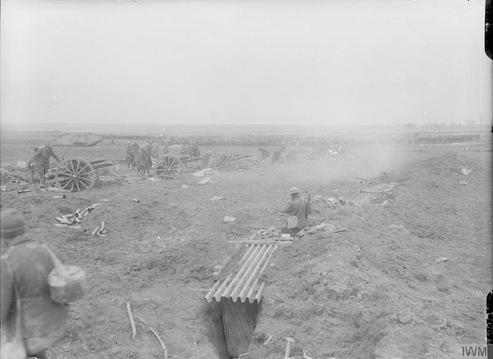 Near Arras April 1917: An 18-pounder battery of the Royal Field Artillery in action in the open, a tank and cavalry horselines, April 1917. Notice "bivvys" with corrugated iron roofs and waterproof-sheets ends in the abandoned communication trench in foreground. Photo courtesy of the Imperial War Museum
Thomas was only 17 at the start of the war so was too young to enlist but his brother William was in the Navy by late 1915.  We know Thomas was still in Sampford Peverell and working as a carter in October 1915 because his name appeared in a local newspaper, reporting on a court case in which he pleaded guilty to the charge of using bad language, and was fined 10s.  The Chairman of the court “gave the defendant some good advice as to his future conduct, and commented on the spectacle of a fine young fellow like the defendant being in the dock on such a charge”.

Perhaps these words encouraged him to sign up, or perhaps he was caught up in the 1916 conscription.  He enlisted in Tiverton and became a gunner in the Royal Field Artillery A Battery 50th brigade.  Thomas was killed in action near Arras in France on 30th March 1917. We don’t know the exact circumstances but according to the CWGC “The experience of the Somme caused the Germans to reconsider their strategy on the Western Front. They constructed a formidably strong defensive position many miles in the rear, and withdrew to it in early 1917. The British called the part that they faced the Hindenburg Line. A large French offensive, supported by a British attack at Arras, withered against the new German defence”.
Thomas Cornish is buried in the Foubourg d’Amiens cemetery, Arras, France. The inscription on his grave, ‘Rest in Peace’, was chosen by his mother.  As his sole legatee she was sent his outstanding pay of £7 1s 0d in June 1917, and in 1919 she was sent a further £3 war gratuity (according to the Soldiers’ Effects list on ancestry.co.uk).

The newspaper report of his death recorded that "This makes the second Sampford Peverill boy to make the Supreme Sacrifice".

In the 1920s his brother Albert Cornish was a newsagent and shoemaker; William, who had served in the Royal Navy during the war, became an engine driver; and Herbert was a labourer and later a miller.  His parents continued to live in Higher Town, as did Wilfred and his family until they had to vacate their cottage, which was opposite the school, when it burnt down in 1939.  There may still be relations of Thomas in the village today.

Thomas Cornish is part of this family tree which we have created on ancestry.co.uk and which subscribers to ancestry can see here: http://trees.ancestry.co.uk/tree/75458494/family