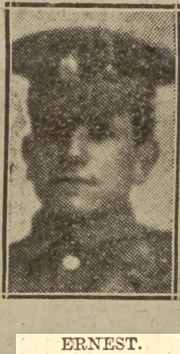 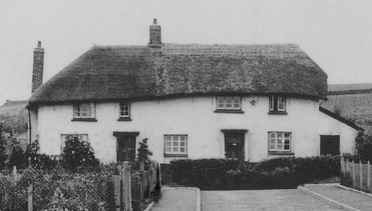 Smoke Alley in the 1960s
In the 1901 census the family was living in ‘Smoke Alley’, one of a pair of adjoining cottages in Boobery (2018: 22-24 Boobery). These cottages were owned by the Trustees of the Poorlands Charity and were let out at a 'market' rent in order to provide an annual income to distribute among the poor of the Parish. The Tuckers’ cottage was actually let to John Bowden, a prominent local farmer, for whom Richard Tucker undoubtedly worked.  Judging by the censuses and Land Tax Returns, the Tucker family continued to live in Smoke Alley until around 1917 so it was the home of the Tucker boys throughout their childhood, probably in the right-hand (easterly) cottage.

In 1907 when Ernest was 8, his mother, Jane, died soon after childbirth and was buried on 15th October with her two-day-old baby boy, who was placed in his mother's coffin.  The funeral was reported in the Sampford Peverell section of the Exeter and Plymouth Gazette as follows:

​“There was a large assembly at the funeral of Mrs Richard Tucker who with her two days’ old baby, was interred in the parish churchyard on Wednesday.  All Mrs Tucker’s sisters and brothers-in-law followed the coffin, as well as the bereaved husband and six children, the latter all under the age of 13 years.  The deceased was the daughter of Mr and Mrs Cotty, who are old and respected inhabitants.”

It must have been a very difficult time for the family, but a few years later, on Feb 11th 1911, Richard remarried.  His new wife was a widow, Annie Wotton.  In the 1911 census they were still living in Boobery with Frederick (now a yard-boy) aged 14, Ernest, 12, Gussie (Augusta), 11, Arthur, 7, and Florrie (Florence), 6, all born and christened in Sampford Peverell.  Their home is described on the census as having three rooms, including the kitchen.  Their oldest brother Herbert John was now working as a farm boy for the Dennis family at Jurishayes near Tiverton.
We can see from Ernest’s military record on ancestry.co.uk that when he enlisted in Tiverton on 1st May 1915 he said he was a carter, aged 19 years and 5 months.  In fact he was only 16.  He was 5’ 4½” tall, weighed 130 pounds, his chest girth was 36”, and his physical development was ‘good’.  His complexion was fresh, his eyes hazel, and his hair brown.

Ernest’s references were provided by his employer, Mr. G Dennis, a farmer of Jurishayes, who was also his brother Herbert’s employer in 1911.  Mr. Dennis said he employed him as a horseman and car driver "anytime when required" and that Ernest left his employ "to join the army".  Asked if he believed Ernest to be sober and honest he answered “yes”, and asked for information as to his character he wrote “Very good man on the whole”.  You wonder what was implied by that ‘on the whole’…
According to Ernest’s military record he joined up at Aldershot on 3rd May 1915, and was in the Army Service Corps 208 regiment as a driver, serving overseas.  He left Devonport on the ‘Caledonian’ on 24th July 1916, and disembarked at Salonika on 8th August 1916.  At some point his brother Frederick was also sent to Salonika and the two brothers must have been there at the same time for a while between late 1916 and late 1917.   Sadly Frederick died there of malaria on 5th September 1917.

On 10th July 1918 Ernest voluntarily transferred to the Devonshire Regiment.  This might have related to a couple of minor offences on his service record: of being ‘drunk in charge of a pair of mules’ in May 1918, and on two occasions (26th May and 5th June 1918)  ‘parading with a dirty harness’, for which he was fined 7 days' pay.  Bearing in mind that he was young, in a war, a long way from home, and that his brother had recently died, some minor misdemeanours are understandable.

Ernest was still in Salonika in July 1918, and on 1st September 1918 he was compulsorily transferred to the Cheshire Regiment, 12th Battalion, for special duties.  He was killed in action near Salonika on 18th September, aged just 19.  In the memorandum about where his effects should be sent (to his father, Richard Tucker, Ashford Road, Sampford Peverell) someone has written ‘no effects’, which seems very poignant.  The records include an acknowledgement from his father of receipt of his British War Medal and Victory Medal. 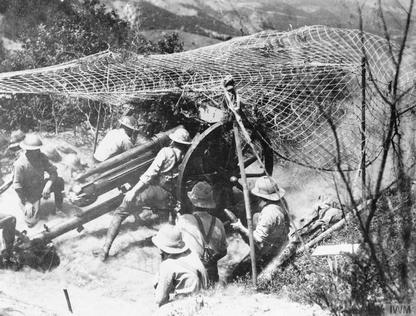 British 18-pounder field gun firing from a camouflaged position on the Doiran Front. Photo courtesy of the Imperial War Museum.
The British Legion have provided the information that Ernest Tucker was killed on the first day of the third battle of Doiran, which took place in Macedonia between the Greeks and British on one side, and Bulgarians on the other.  The first two battles had ended with the allied side being driven off, and in the intervening period the Bulgarians had strengthened their already strong positions.  So in spite of a heavy bombardment from the British, the allies were again driven off after two days of bitter fighting.  During the fighting the brigade to which Private Tucker’s battalion belonged lost 65% of its soldiers.  Nevertheless, several days after the end of the battle, it was noticed that the Bulgarian positions had gone quiet.  When the British sent patrols to investigate, it was discovered that the Bulgarians had withdrawn.  The reason was that their rear was threatened because a Serbian and French army had defeated the Bulgarians at the battle of Dobra Pole, and were advancing on Doiran.

The following is from an account of the fighting in Doiran from ‘The Long Long Trail’ website:

​“The offensive began in July 1918 but the British contingent did not play a significant part until early September. Then the British attacked a series of fortified hills. The final assault began along the whole front on 15 September 1918; the British being engaged in the Lake Doiran area. This battle was really on the 18 and 19 September 1918 and was a disaster for the British Divisions. They had to frontally assault 'Pip Ridge' which was a 2000 foot high heavily defended mountain ridge with fortresses built on some of the higher mountains, notably Grand Couronne. (This was what the Bulgarians had been working on in the first months of 1916 and early 1917.) They sustained very heavy casualties.“

The article includes an eye-witness account specifically mentioning Ernest Tucker’s battalion, the 12th Cheshires.  This is just a small part of that account:

"The Battle of Doiran is now a forgotten episode of the Great War, overshadowed by the doings of Haig in France and Allenby in Palestine. There was no full contemporary account of the Battle in any British Newspaper. Sir George Milne's dispatch was not published and did not appear in the Times until January 23rd 1919, and then only in truncated form. The very name of the battle is unknown to most. Yet, in singularity of horror and in tragedy of defeated heroism, it is unique among the records of British arms.”
…
“Our attack on ' Pip Ridge' was led by 12th Cheshires. The battle opened with a crash of machine-gun fire, and a cloud of dusty smoke began to blur the outline of the hills, Almost immediately the advancing battalion was overwhelmed in a deadly stream of bullets which came whipping and whistling down the open slopes. Those who survived were followed by a battalion of Lancashire men, and a remnant of this undaunted infantry fought its way over the first and second lines of trenches - if indeed the term " line " can be applied to a highly complicated and irregular system of defences, taking full advantage of every fold or contortion of the ground. In its turn, a Shropshire battalion ascended the fatal ridge. By this time the battle of the " Pips" was a mere confusion of massacre, noise and futile bravery. Nearly all the men of the first two battalions were lying dead or wounded on the hillside. Colonel Clegg and Colonel Bishop were killed; the few surviving troops were toiling and fighting in what appeared to be inevitable and immediate death. The attack was ending in a bloody disaster. No orders could reach the isolated cluster of men who were still trying to advance on the ridge. Contact aeroplanes came roaring down through the yellow haze of dust and smoke, hardly able to see what was going on, and even flying below the levels of the Ridge and Grand Couronne. There was only one possible ending to the assault. Our troops in the military phrase of their commander, 'fell back to their original positions'.  Of this falling back I will say nothing. There are times when even desperate heroism has to acknowledge defeat.” 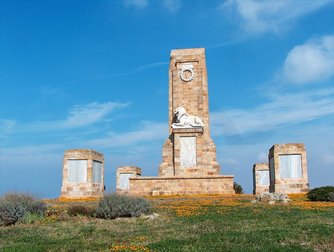 The Doiran Memorial to the Missing, Salonika, Greece
Ernest does not have an individual grave but his name is engraved on the Doiran Memorial to the Missing in Salonika, Greece.  The panel list gives his name as being in column 3 of the west face of pylon 1.   The grave registration records that he was 18, and that his parents were “Mr R and Jane Tucker of Goldsmoor Cottage, Westleigh, Wellington, Somerset”. 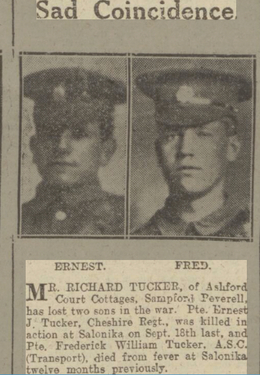 This is the article from the Western Times of 25th October 1918 about the two Tucker brothers.   Headlined 'Sad Coincidence' it reads:

​
Image © Local World Limited. Image created courtesy of THE BRITISH LIBRARY BOARD.
Image reproduced with kind permission of The British Newspaper Archive on www.britishnewspaperarchive.co.uk : link to page for those reading this on the internet
Details from List of Casualties (under Military Records on Ancestry.co.uk)

Ernest Tucker is part of this family tree which we have created on ancestry.co.uk and which ancestry subscribers can see here:
http://trees.ancestry.co.uk/tree/74511558/family?cfpid=46297950557

Information about the Cheshire regiment from ‘The Long Long Trail’: http://www.longlongtrail.co.uk/army/regiments-and-corps/the-british-infantry-regiments-of-1914-1918/cheshire-regiment/