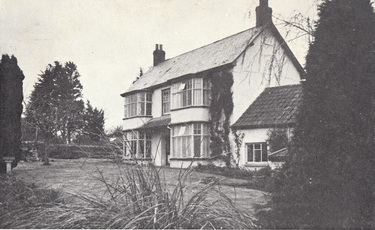 Mount Pleasant, mid 20th century when it was a B&B.
William Henry Taylor was the only child of George Henry Taylor 1858-1917 of Sampford Peverell, and his first wife Lucy J Winsborrow 1859-1906 of Exeter.
​
William Taylor was born on 12th March 1883 and was baptized in Sampford Peverell parish church six weeks later on 29th April 1883. His parents lived in Higher Town in the 1891 census, but by 1901 they had moved to Mount Pleasant on Whitnage Road where his father was a baker and farmer. 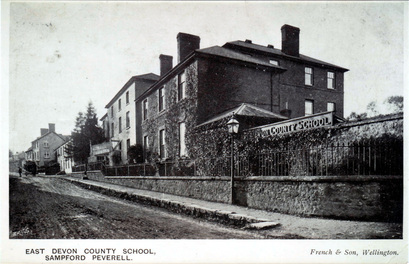 As a boy William was a pupil of the East Devon County School in Lower Town, Sampford Peverell.  The premises later became the St Boniface home for boys.  A newspaper article published on 14th February 1902 in the Exeter and Plymouth Gazette reported that “At the recent Veterinary College examination Mr. William Taylor, of Sampford Peverell, passed the first trial direct from the East Devon County School, and has taken tenth place among 80 students.  He had no coaching beyond the usual school curriculum.”  He continued his veterinary studies and graduated from the Royal Veterinary College on 14th July 1905 (information thanks to the college librarian), after which he joined the Army Veterinary Corps (which later became the Royal Army Veterinary Corps). 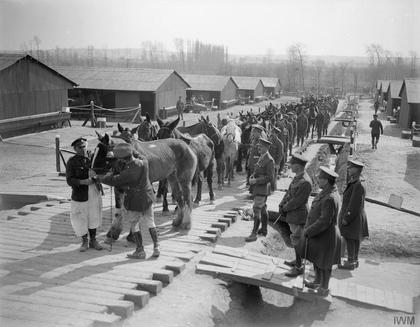 Wounded horses arriving at No. 5 Veterinary Hospital at Abbeville, 22 April 1918. Photo courtesy of the Imperial War Museum.
According to the London Gazette of 4th September 1906 he was made Lieutenant (effective from 5th September 1906).  At the time of the 1911 census he still held the rank of Lieutenant and was on active service as an army veterinary surgeon in South Africa. The AVC had two sections in South Africa, one in Pretoria and one in Potchefstroom, but we don’t know which one he was in.  The London Gazette of 12th September 1911 announced his promotion to the rank of Captain.

William Taylor was transferred to France with the British Expeditionary Force at the very start of the war.  Early in the war the Veterinary Corps was reorganized to provide a mobile veterinary section as part of each Division that went overseas.  According to his medal card he was Officer Commanding No 3 Mobile Vet Section, 2nd Division.  The Long Long Trail website explains that

“A unit of the Army Veterinary Corps, the Mobile Veterinary Section came under command of the Headquarters of the formation known as a Division. It was in effect a first aid unit, providing medical care for sick, wounded or injured horses used by the units of the Division. If a horse required greater care that could not be provided by the MVS, the animal would be sent to a Base Veterinary Hospital and its place taken by a horse delivered from ASC Remounts.”

​Horses were essential to the army at the time, both for riding and for pulling carts and guns.  The British army deployed and cared for over two million horses and mules during the war.

The 2nd Division was one of the first British formations to move to France, and remained on the Western Front throughout the war.  It took part in most of the major actions including, amongst many other battles, the first battle of Ypres in 1914, in which Major Taylor would probably have taken part. 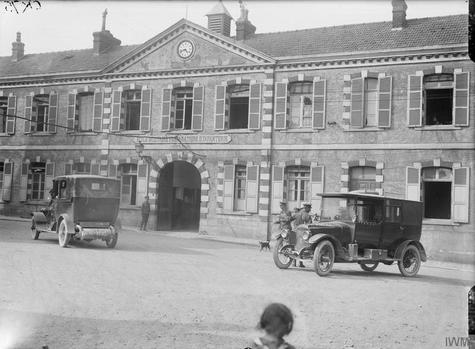 The outside of the Ecole Militaire, the Central Office of the British GHQ between 31 March 1916 and April 1919, Montreuil. Photo courtesy of the Imperial War Museum.
The London Gazette of 19th Oct 1915 announced that from 31st July 1915 William Taylor was one of two “Captains to be temporary Majors whilst holding the appointment of Assistant Directors of Veterinary Services”.  According to his medal card he was on the Royal Army Veterinary Corps Staff at HQ No 2 Corps, so he would have been based at General HQ which was at St Omer at the time, and which moved to Montreuil-sur-Mer in March 1916.  GHQ was an enormous administrative centre, staffed by both military and civilians, which decided strategies as well as coordinating the deployment of troops, munitions, supplies, and transport. The Veterinary Section was responsible for the vast number of horses imported to, and used on, the Western Front, the Mobile Veterinary Sections, and the veterinary hospitals.  They did an amazing job in the circumstances:  2.5 million animals were admitted to their care on the Western Front, and 80% of injured animals were treated and returned to duty.  The Army Veterinary Corps was given the prefix ‘Royal’ on 27th November 1918.  The Quartermaster General stated: “The Corps by its initiative and scientific methods has placed military veterinary organization on a higher plane.  The high standard which it has maintained at home and throughout all theatres has resulted in a reduction of animal wastage, an increased mobility of mounted units and a mitigation of animal suffering unapproached in any previous military operation.”  Horses were not the only animals for which the RAVC had responsibility; Britain deployed over 20,000 dogs on the Western Front.  They were used as sentry dogs; for scouting (alerting soldiers to the presence of strangers); for finding the wounded and taking them medical supplies, and for carrying messages, for which they were much better equipped than humans, being faster and harder to detect.
On 17th December 1918 the London Gazette published a list of people ‘Mentioned in Dispatches’.  The introduction to the list records that Field-Marshal Haig sent the following from General HQ on 8th November 1918, to the Secretary of State for War: “My Lord, I have the honour to submit a list of names of those officers, ladies, non-commissioned officers and men serving, or who have served, under my command during the period 25th February, 1918, to midnight 16th/17th September, 1918, whose distinguished and gallant services and devotion to duty I consider deserving of special mention”.  In the ‘Commands and Staff’ section the names include that of “Taylor, Capt. (T./Maj.) W.H., R.A.V.C.”
Conditions at GHQ were good, and relations with the French were fairly cordial until prices and rationing put a strain on the local economy.  In 1918 there was a huge influx of refugees to the area, hospitals became overloaded, and there were severe outbreaks of measles, dysentery and flu.  William Taylor died in France on 11th Feb 1919, at the age of 35, after a short illness, most likely the epidemic of Spanish flu that swept the world shortly after the end of WW1 causing tens of millions of deaths.  He is buried in Longuenesse, St Omer, a hospital centre.  When he died (outliving both his parents) he was reasonably wealthy and his probate was £5,280 12s 2d which he left to Walter John Winsborrow, his uncle.

The London Gazette of 4th September 1919 issued a list of those who had been awarded the Croix de Guerre by the King of the Belgians, and this included, posthumously, Major Taylor.  We don’t know specifically what it was awarded for, but foreign nationals could only earn this medal for acts of heroism conducted while on Belgian soil.

This was not his only posthumous award.  The London Gazette of 3rd October 1919 also listed him as recipient of the French ‘Ordre du Mérite Agricole’ as ‘Chevalier’, or Knight.  This order is second only to the Légion d’Honneur, and is awarded to people who have rendered exceptional service in public duties or in the practice of agriculture, so his work may have included assisting French farmers during the war, and helping with the restoration of agriculture in Northern France in the immediate aftermath of the war.

Major Taylor’s name is commemorated on the war memorial plaque in Sampford Peverell parish church, and also in the Royal College of Veterinary Surgeons in London on a memorial to those members who died on active service during WW1.  The memorial lists nine members of the RCVS who were killed in action, twenty four who died of wounds, and thirty four who died of disease, including William Taylor.  The college librarian has kindly sent us the photo below. 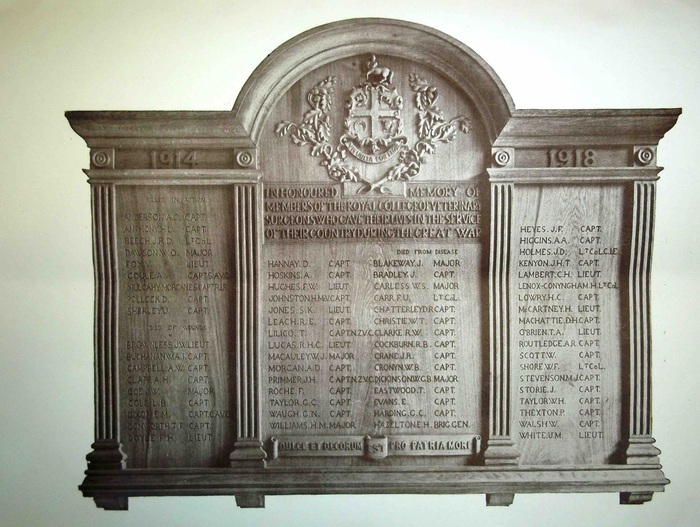 W H Taylor's name on the WW1 memorial in the Royal College of Veterinary Surgeons. This photo, courtesy of their librarian, was published in 1921 when the memorial was unveiled.
Details

William Taylor is part of this family tree which we have created on ancestry.co.uk and which ancestry subscribers can see here:
http://trees.ancestry.co.uk/tree/69315156/family?cfpid=42195524583

Information about the Army Veterinary Corps from the Long Long Trail: http://www.longlongtrail.co.uk/army/regiments-and-corps/army-veterinary-corps-in-the-first-world-war/

Click on the links below to see the relevant articles:
London Gazette item about his promotion to Lieutenant 04 Sep 1906

London Gazette item about his promotion to Captain 12 Sep 1911