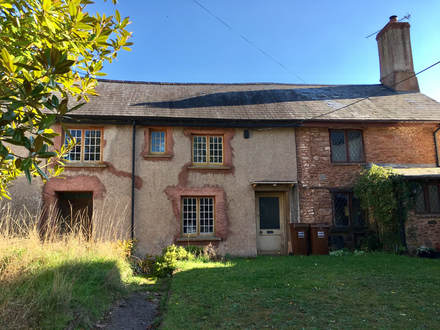 A modern photo showing the police house where the Fewings family lived - the middle cottage of the three
Herbert Reginald FEWINGS was born on 9th October 1898 in Sampford Peverell and baptised the next day at St John the Baptist Church. He was the third of five children of William Thomas Fewings (1867-1950) and Catherine Jane Stoneman (1867-1947) from North Tawton.  Catherine left home shortly after the 1881 census, aged 14 and became a domestic servant. In the 1891 census she was working in Toroham (now known as Torquay) , near Newton Abbot.  Herbert’s father, William Thomas Fewings, was born into a farming family in Rose Ash, 5m SE from South Molton in West Devon. He assisted his father on the 108 acre farm until just after the 1891 census when William had a career change and left farming to join the police force. He served in the North Tawton area until early 1898. William and Catherine were married in 1894, and their first two children Lily and Percy were born in North Tawton.  In 1898 William, known as Thomas, took up the position as police constable for Sampford Peverell where later that year Herbert Reginald was born.
​
In the 1901 census the Fewings family, now with four children less than 5 years of age, were living in Lower Town, Sampford Peverell (2018:  21 Lower Town). Herbert spent his childhood in Sampford Peverell and would have gone to the village school, until 1909 when the family moved to Stoke Canon, 10 miles south down the Exe Valley road from Tiverton towards Exeter. The father, Tom Fewings, was now police constable for this Stoke Canon, and by the 1911 census had 5 children. The eldest, Lily Gwendoline, had left school and was an apprentice dressmaker. The other 4 children were all still at Stoke Canon school.  Herbert's father continued to own several properties in Sampford Peverell, such as Coombe Cottage, in Higher Town.  After his eventual retirement in 1918 Tom Fewings moved back to Sampford Peverell to spend "the residue of his days in our peaceful village among friends."
Herbert left Stoke Cannon school in April 1912 (just before his 14th birthday) and started at Exeter National school. He stayed there for 16 months and his school record shows that he “left and goes to work” August 1913 and joined the GWR (Great Western Railway). One year after the war started, Herbert’s elder brother, Percy Victor Fewings, who had previously been working for the GWR, enlisted as a private in the Army Service Corps (later called the RASC) and served there for the duration of the war. His service record is in the list of Sampford Peverell surviving men (and women) who served during the war.  There is a record on findmypast.co.uk  showing that Herbert joined the NUR (National Union of Railwaymen) on 9th November 1915. His occupation at that time was a Motor Condr (presumably conductor) working in Paignton. On 23rd August 1916 he transferred to branch 974 (location unknown) and less than 3 months later, on 9th November 1916 he transferred to branch 1714 for a short period before enlisting.  He was serving as a porter at Churston, Brixham, according to his war enlistment record in Exeter.
Herbert initially joined the Royal North Devon Yeomanry Company as Private #4031 at the end of 1916. This regiment was originally formed in 1798 and was a volunteer infantry regiment based in Barnstaple. It had been a cavalry regiment and by 1893 was divided up into 4 squadrons. It saw service in the Boer War and on 1 Apr 1908 was renamed the Royal Devon Yeomanry and trained and equipped as Hussars. The regiment was mobilised when the UK joined WW1 on 4th August 1914.  It moved to the Colchester area in Essex, but in September 1915 the regiment was dismounted (ie was no longer cavalry), transported to Liverpool and sailed to arrive at Gallipoli (now part of Turkey) on 9th October 1915. The regiment were initially used to dig trenches, but by November were in the firing line, then on 19 December they were evacuated and sailed to Egypt , landing in Alexandria on 30th December 1915 . They served on the Suez canal defences and were part of the Western Frontier force. 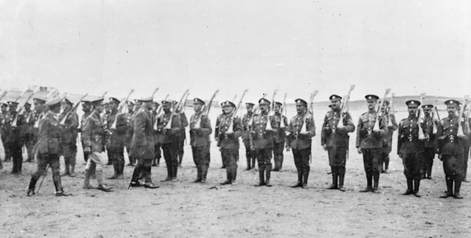 Prince Arthur, Duke of Connaught, inspecting the Guard of Honour of the Devonshire Regiment, 16th Battalion, at the GHQ of the Egyptian Expeditionary Force, at railhead near El Ramle, March 1918. Photo courtesy of the Imperial War Museum
Herbert must have joined the regiment (maybe not in action in Egypt though) at the end of 1916, as on 4th January 1917 the regiment was amalgamated with another regiment to form the 16th Battalion Devonshire Regiment - where he was given a new service number #71971.  This regiment took part with the 74th Division in the invasion of Palestine throughout 1917. In the early part of 1918 the regiment was involved with the capture and defence of Jerusalem. On 3rd April 1918 the 74th Division was advised that it would be posted to France. Disembarkation from Alexandria was completed by 30th  April 1918 and they landed at Marseilles a week later on 7th May 1918. The Battalion served in France and Flanders for the remainder of the war.
Herbert transferred into the 10th Battalion of the Cheshire Regiment #72279 where he served until his death near Reims on 27th May 1918.  There are detailed Cheshire Regimental diaries for the 10th Battalion which record day by day and in some cases hour by hour what the regiment were doing.  Copies of the diary entries for the days leading up to his death are held on www.ancestry.co.uk
It seems that there was an apparent breach in the German line and the Battalion advanced the ¾ mile into this perceived breach. The German forces counter attacked with gas, heavy bombardment, machine gun fire and gunfire from low flying aircraft.  The 10th Battalion retreated towards Pevy, some 8 miles West of Reims, when they had started from, but sustained considerable losses, with some companies being totally devastated. The deaths of non-ranking soldiers are not recorded by name, but Herbert’s death is almost certainly part of the “200 OR (Ordinary Rank) casualties” mentioned in the diary entry for the day following his death.

Herbert’s  death is recorded on the Soissons Memorial on the banks of the river Aisne, Reims – 60 miles NE of Paris. The location is very close to where he lost his life and the memorial records the names of nearly 4,000 men who suffered the same fate. His death is also recorded on the GWR Memorial List in Paddington Station, London and on platform 5 at Exeter St David's station. 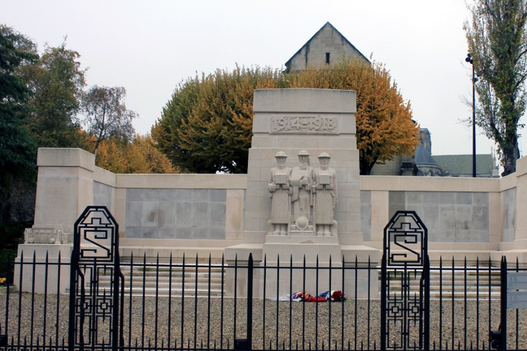 He is part of this family tree on ancestry.co.uk which subscribers to ancestry can see here:
https://www.ancestry.co.uk/family-tree/tree/116827186/family

His service card and the regimental diary entries from www.Ancestry.co.uk can be seen on this password protected page